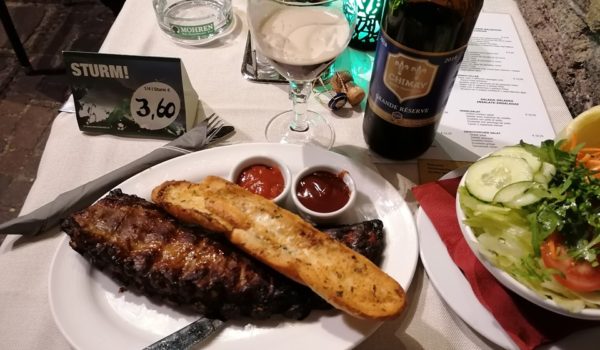 I have eaten quite a few spare ribs in my life, but I cannot recall any that by default would arrive with a big bowl of salad and a half of a baguette with garlic topping. Why the hell would one want a baguette with spare ribs? It is not that one can spread them over the bread like butter. The way it looked, the cook knew that the ribs would be substandard and wanted to apologize in advance by offering a couple of extras.

And true to my suspicions, the spare ribs were dreadful. They were overcooked, but peculiarly did not taste of burned meat at all. It is as if the meat got black not through cooking but because of its old age. It was completely dry, and if any marinade had been applied to it, it must have long evaporated. I am not even sure what animal the ribs were made from, for they did not taste at all of pig. Judging by the meat’s age, it could have been a mammoth.

Just to make things worse, the meat was full of tiny, very hard and often extremely sharp bones. I have accidentally swallowed a few, causing an extremely unpleasant sensation as they travelled down my throat. The others made my teeth screech, forcing me to constantly check that they did not break. The menu of the Elferhaus should have the contact details of the nearest dentist printed in big letters. Actually, if I were the restaurant’s owner, I would have teamed up with a dentist so that I could have a share of his profits.

The two sauces did not look bad, at least until I have tried them. One of them was the typical barbeque sauce – very strong, sour and artificial. The other was supposed to be a hot chili sauce, I guess, and made a rather good first impression for a second, which, unfortunately was almost immediately replaced by the taste of tomato. Something went wrong proportions-wise.

On the other hand, the garlic bread was the king of the show. I kept most of it until the end in order to leave the Elferhaus with not too much disappointment. The problem is, I do like the Elferhaus. During my very first visit to Innsbruck absolute ages ago, it was at the Elferhaus that I discovered the strong Belgian Chimay beer, and it was love at the first sight. I am quite sure, that first encounter has affected my life in quite a big way and possibly contributed to the global climate change more that I would like anyone to know. However, I do not yet hate the humankind strongly enough to advise anyone to try the Elferhaus’s ribs. No, order the garlic bread and a bottle of Chimay and thank me for all the dentist’s fees you have saved.