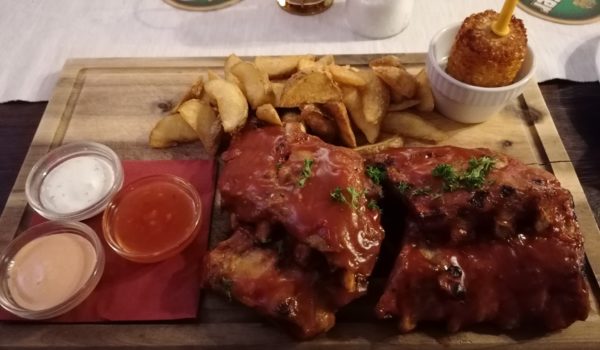 In summer, the town of Zell am See turns into a Mecca for those for whom the real Mecca is too hot. Thanks to highly successful advertising, every year it is visited by tens of thousands of tourists from the Middle East – the reality that made the town’s businesses, restaurants in particular, adjust or fear losses. There are several Arab-only restaurants, with Arabic-speaking waiters and menus in Arabic. However, most of the other restaurants have also shifted from serving pork-heavy Austrian dishes to pizza, pasta, steaks and burgers.

Brasserie Traube, which belongs to a hotel, is an exception, betting on mostly Austrian cuisine and an extensive wine card. Unsurprisingly, most of the visitors are not Middle Eastern (although I did notice a couple at the table outside enjoying a pizza, which is also on the menu in summer). The only thing important for me, of course, was the fact that the menu boasted of the “famous spare ribs” served with a corn on a cob and three home-made sauces.

Looking back, I think they should have written “a corn on a cob and three home-made sauces served with spare ribs.” At a first glance, the sauces looked very standard – like industrial garlic, cocktail and Chinese chili sauces. Their taste was totally different, however. The white sauce was very thick and more mayonnaise-y than garlicky. The cocktail sauce was also thick and lacked the usual acidic flavor. The chili sauce was not very strong and ten times less sweet than the stuff from a supermarket’s bottle. The corn was the absolute highlight: grilled rather than boiled, it was served swimming in melted and salted butter. The best way to prepare corn on a cob ever.

Regrettably, the ribs themselves, while perfectly OK, did not impress. Instead of being marinated, they were covered by a layer of sweet honey-based sauce, making their dipping in the other sauces almost pointless. The meat underneath was quite ordinary: pre-boiled to make it tenderer and easier to detach from the bones, but fortunately not fat and lacking the annoying skin.

Still, being the only restaurant serving spare ribs in Zell am See (at least the only one I found), the Brasserie does its job very well. It is a nice place to drink wine, too.