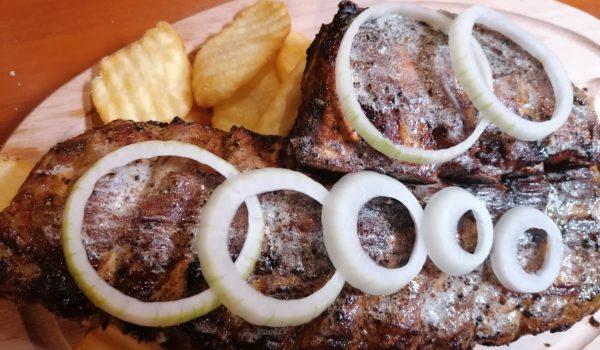 Oh, Strandcafé, how do I miss you. No, not your second incarnation with the two-story high windows, plastic wood-colored tables and fancy hand dryers. Not your super-griller, the biggest in Austria (or was it Europe?), spitting out identical golden-brown racks of ribs every 10 seconds – always tasty, always overpriced, never surprising. Not your gigantomaniac grandeur that ultimately brought your demise. What I miss is the old Strandcafé, with its ragged and smoke-impregnated interior, the questionable hygiene, the all-Yugoslavian crew, the stinky never-washed coal grill, where the pork ribs shared its last moments with the Steckerlfisch, the tiny and permanently malfunctioning toilet, and the “manager” in a sweaty t-shirt doing accounting just outside the kitchen while drinking beer and smoking one cigarette after the other. (OK, I don’t really miss the manager.) In those old days, the ribs were sometimes burned, sometimes criminally undersalted, occasionally oversalted, sometimes so tough that it was hard to say where the meat ended and the bone began. The mixed salad could come with the potatoes that did not have enough time to turn into a potato salad or cabbage that tasted of nothing. Yet, once in a while – more often than statistically possible – the stars would align and the ribs would come out brilliant – so good that I would immediately forgive the restaurant all its past faults.

All I want to say is that if the old Strandcafé reopened at a remote village some 60 kilometers from Vienna, I would not hesitate visiting it. Visiting it several times, in fact, until the ribs turn out as good as I remember them.

Wilfersdorf is more than 60 kilometers from Vienna, and a lot of people seem to go there just to eat the ribs at La Hacienda, a Mexican-styled restaurant that is totally Austrian upon a brief examination. If anything, it seems to be a popular location for birthday parties, since during my short lunch, the music turned to a Latino version of “Happy Birthday to You,” and a waiter walked past carrying a cake slice with a candle on it at least six times.

The ribs were quite burned. Not microwave-burned: they really had a slight taste of meat burned over a real fire. That was easily their best characteristic, but overall the dish did not disappoint. The meat was not at all fat but quite juicy, and offered enough resistance when being removed from the bone to prove it was not pre-boiled (but without becoming annoying). The only setback was the sauce – not because it was bad or industrial, but because there was only one type of it. The mixed plate of starters that I had before the ribs came with at least three different sauces, and why the cook would decide against serving smaller portions of them to accompany the ribs is beyond my understanding.

60 km is a very long distance, but considering the present spare ribs situation in Vienna, it is almost worth travelling. Try to go when the weather is nice, so that you can sit in the restaurant’s shady garden: the inside is a bit too crowded and noisy. And do not forget to book in advance, since La Hacienda is more popular than one would expect.