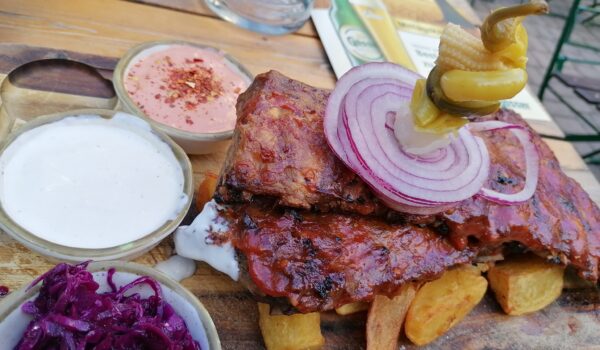 Brettljausen go equally well with beer and wine, depending on whether you are hiking in the mountains or relaxing at a Heuriger. Martinigansl, too, is fine with both beer or wine, or even beer and wine. Spare ribs, on the other hand, is a purely beer food. There is something barbarian in them, like there is some inherent finesse in wine. And then there is the problem of touching wine glasses with greasy hands.

Anyway, after an hour of a desperate search for a Brettljause in Perchtoldsdorf, I thought of the Gösser Schlössl, an attractive beer-drinking establishment at the outskirts of Vienna that I passed many times in a tram but never came around to visiting. It had beer, it had spare ribs, it had a rather nice quiet backyard, and I was hungry. All in all, a perfect constellation.

Ultimately, it was the hungriness that contributed most to my enjoyment of the dinner. Gösser beer does not really count among my favorites (although later I realized that the restaurant also served the much better Staro Brno), sitting outside was pleasant only up to the moment when the sun disappeared behind the clouds, and the spare ribs were simply not very good.

The initial impression, thanks to the nice presentation, was positive, but the very first attempt at cutting the ribs made the sharp knife that the restaurant had provided look like a bad joke. It was perfectly possible to separate the bone from the meat by simply shaking it. To achieve that level of meat detachment, one must have cooked the ribs for hours if not days. Despite that, however, the piggy taste was still quite noticeable due to the lack of tasty marinade: one rack had none of it as far as I could tell, while the second one just a bit. The garlic and cocktail sauces did little to improve the taste, being the same standard sauces served, for whatever reason, by 95% of Austrian spare ribs restaurants.

Of course, as is the usual case with spare ribs, the more I got into the eating and drinking routine, the less noticeable the dish’s deficiencies became, and at the end I did appreciate the feelings of getting filled up and somewhat pissed. But frankly, one can achieve the same feelings without travelling for ages to the 23rd district.