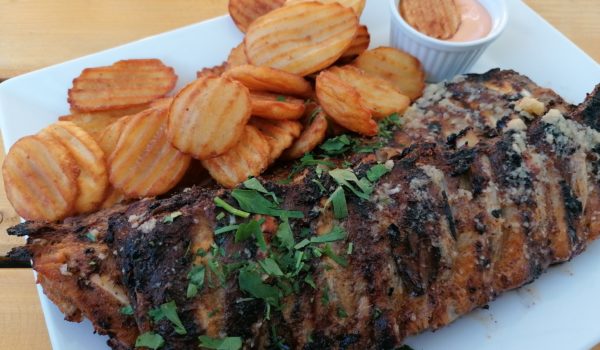 It took me more than twenty years to visit the Schanzinger, which is quite an achievement considering that it is within walking distance from my home. Since I had accidentally discovered this small restaurant while cycling, I always intended to give it a try. Yet somehow that never happened: sometimes I passed by when I was not hungry; sometimes I was hungry but the restaurant was closed (at one point it had really weird opening hours, like, Friday to Sunday at lunchtime only); and sometimes I would simply miss it, getting lost in the narrow streets of the village-like neighborhood. In those twenty years, the restaurant has changed its name and owners multiple times. “Schanzinger” is its latest incarnation, opened just a few months (if not weeks) ago.

It looks very nice. The garden is very sunny and tranquil, separated by a tall bush wall from an already quiet street. The service is friendly and efficient, and the only problem is the menu, which is not particularly creative. It is quite extensive, with burgers, pasta and pizza in addition to the standard Austrian stuff, but I would struggle if I had to choose different dishes, say, five times in a row.

Today’s decision came easy, of course, for spare ribs is an obvious choice for a new location (in the absence of a Brettljause). Schanzinger’s ribs come in two sizes, normal and XXL, and in two varieties, honey and garlic. Normally I am very suspicious about different flavors, because it usually simply means that a different type of topping gets applied to the ribs just before they go into the hot oven for the final warm-up. (I have spent enough time during the COVID lockdown preparing pre-cooked supermarket spare ribs to learn that.) Schanzinger was no exception in that respect, and I could actually taste very typical industrial spare ribs deep underneath the marinade. It is the kind of taste that one learns to recognize immediately, having experienced it a few times in different restaurants. To his credit, the cook at least tried to hide the industrial nature of the ribs by adding all kinds of spices to them. I even found a laurel leaf glued to the meat. Or, at least I hope it was a laurel leaf and not some random leaf brought in by the wind.

While the ribs exhibited some sort of value added, the sauce, sadly, was as boring as insufficient: a typical garlicky sort, but for some reason colored orange rather than white. The potatoes, on the other hand, were well made: thoroughly cooked without being burnt and not at all oily.

At the end, I left the restaurant satiated and satisfied, but not as much because of the quality of the ribs as thanks to the coziness of the garden. I am not going to wait another twenty years to revisit.