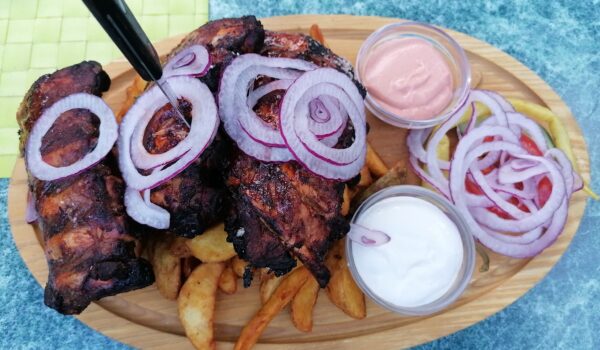 Yet, Hansi’s location at the edge of the Lobau park, in the building that once belonged to a Chinese restaurant and still maintains typical Chinese decorations, makes it a perfect destination for a beer while I am doing my cycling rounds in the evening, effectively eliminating all the health gains that my rare attempts at sport bring me.

If anything, you can rest assured that eating spare ribs at Hansi is not going to kill you. They are cooked so thoroughly (read: burned) that even if the meat had had any malicious bacteria in it, they were charred to the point of complete harmlessness. No, the ribs don’t taste of burned meat as such, but they are so dry and tasteless that even the animal they came from is hard to identify. They could have come from the owner’s former business partner with whom he had disagreements, and you won’t be able to tell for sure.

The main trouble is that the overcooking had killed any trace of the ribs’ marinade, so there was also no way to say if the cook had any intentions of adding a bit of special flavor. He certainly did not indent to get creative with the sauces, for both the white garlic and the pinkish cocktail sauces were highly industrial.

I like Gasthaus Hansi, but I can only recommend its spare ribs if you are a) extremely hungry, b) very healthy or not caring much about your health, and c) highly indifferent when it comes to fine food.