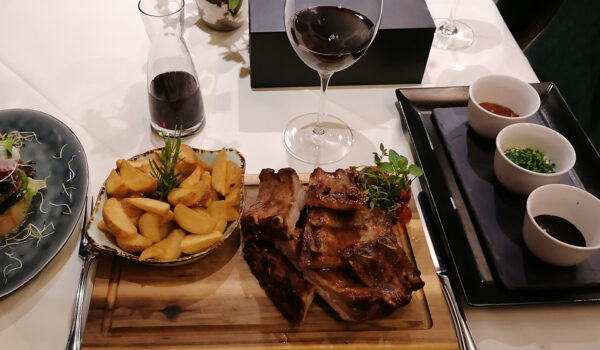 The last time I remember being so wet was when I was 11 and my friend and I had discovered an unattended water hose, which we didn’t hesitate testing on ourselves. I remember it quite clearly because my parents were not amused, this being the second time I had to change my clothes on the same day (I can’t recall what the first occasion was).

Today it was a simple rain that drenched me, the rain I totally expected and did nothing to counter. Well, not completely true. I put a rain protection cover over my backpack, pulled a waterproof jacket on and opened my umbrella. I even thought of pulling on the waterproof trousers that I had in my backpack, but stopped because of the inconvenience of changing trousers in the middle of a hiking path.

Nothing helped. Everything inside the backpack got soaked including the waterproof trousers (despite the fact they were in a plastic bag), and my jeans leaked water at every squeeze I dared giving them. I doubt that jeans are supposed to do that. I would have killed for any restaurant with a fireplace.

I ended up at the Stiege Nr. 1, a very nice restaurant without a fireplace, but with spare ribs. It’s a cool restaurant – a kind of restaurant where you see a picture of the cook at the entrance and then at the end you see the cook himself bringing Schapps to customers. The cook obviously knows his job; I saw a few dishes delivered to other tables that I wish I had ordered instead of my ribs.

Not that the ribs looked bad. In fact, this was one of the best presented dishes I’ve seen for quite a while. According to the menu, they were made from the special breed of Duroc pig, resulting in a particularly tender meat. And perhaps this was the problem: the Stiege wanted so much to maintain the good pig taste, that it was very careful not to burn the meat even slightly and not to spoil it with marinade or strong sauces. A marinade was all but absent, and the two BBQ sauces were too similar and, although probably homemade, not too much different from the sauce one can get at a supermarket.

I liked the restaurant. Liked it a lot – it’s really nice inside, the service is perfect, and letting someone as wet as I was in was more than kind. The problem was, I prefer my spare ribs tasty and burned, while the ones of the Stiege were too perfect. They would have benefited from a bit of carelessness.