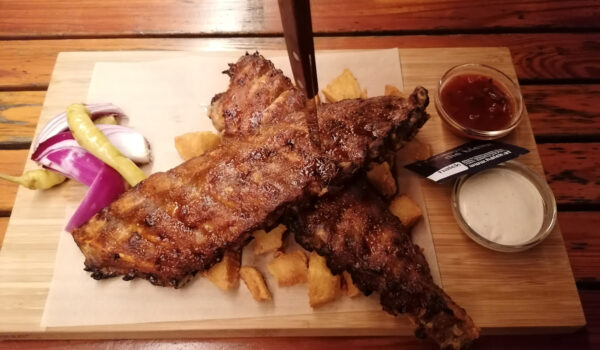 Wieden Bräu is one of Vienna’s few “real” breweries, meaning is that they produce their beer in-house, rather than having a deal with one of the big beer makers outside. It is also one of the oldest ones, and it is surprising that it has been off my radar for so long. This might have something to do with my only visit there many years ago, the only memory of which was a walk to the toilet through a smoking room that even someone like me, generally tolerant to the smell of tobacco (at that time anyway) found disgusting. The smoke was so thick that it was hard to see through it, not only to breathe.

I am quite sure the restaurant does not have a smoking room anymore thanks to the recent legislation, and better still, I discovered it had a large and slightly hidden garden. The garden is surrounded by residential buildings, and a result the laws for the closure time must be really strict. When I arrived around 21:00, the restaurant was starting to close down, but while the waiter was running around, announcing last rounds with his thunderous voice, I managed to finish three mugs of beer and one huge serving of spare ribs.

Ordering the large portion (the Bräu also offers a small one) was probably a mistake, for finishing two full rack of ribs would have been difficult even without the time pressure. There was really a lot to eat there, even for the relatively high price of 19 euros. Fortunately, the ribs were not boring and on the contrary, surprisingly enjoyable. They were well marinated, and the meat was tender without tasting unnatural. There was still a membrane (so-called silverskin) on the back of the ribs, which I generally find annoying, but some people consider essential for whatever reason. At Wieden Bräu, the cook had managed to make the membrane look less than a cellophane and even edible by itself. Two sauces were provided – a white garlicky one and a red spicy one. Both appeared to be homemade; having eaten so many industrial ribs in my life, I know three or four standard sauces that lazy restaurants always offer, and these two were different. The red sauce appeared to have some black bits floating in it, but it was too dark in the garden to find out what it was. Judging by the taste, it could be shredded capers.

The beer of the brewery is rather light. Usually I prefer stronger sorts, but in this particular case, the relatively low alcohol levels were welcome: one needs a lot of liquid to help process so much food, and a strong beer would have endangered my productivity in the office the next day. It is possible, however, that the raw onion supplied with the ribs made the working day of my colleagues with whom I had to talk less pleasant. They did not complain though, the polite people that they are.