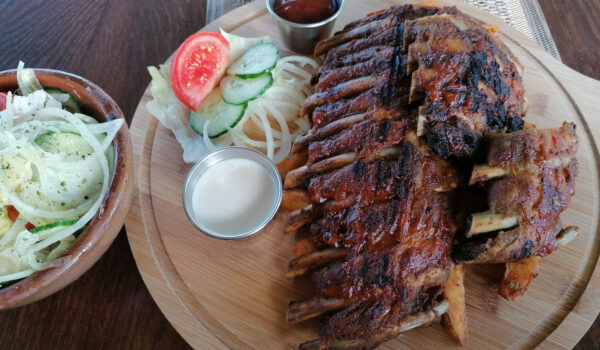 The village of Kritzendorf near Klosterneuburg is known for having a couple of really good Heurige as well as the fact that the Danube cycling trail passes through it. Today I learned that it also had a public beach with a pizzeria/grill restaurant on it, unimaginatively called Donau Grill-Restaurant & Pizzeria Strombad Kritzendorf.

Mixing a grill restaurant with a pizzeria makes me suspicious straight away, but a quick glance at the menu made me realize that the restaurant had more to do with meat-heavy Balkan food than with Italian cuisine. Quite a few items, such as a pljeskavica, were obviously Yugoslavian, which actually raised my expectations towards the spare ribs. Ribs normally benefit from a slightly barbaric approach, and Balkan food – no offence intended – is quite barbarian in a positive way, by means of offering huge quantities of well-grilled stuff at fair prices.

Quantity- and price-wise, the ribs indeed didn’t disappoint. They looked quite impressive on the oval board, and the mixed salad I ordered with them also surprised me by its size. Unfortunately, I forgot about the other rule of Balkan food, and that is, “simplicity is key.” The salad was nothing but cut fresh vegetables with no dressing, and the ribs were little more than overcooked meat with bones.

To be fair, some effort must have gone into marinating the meat, because the taste of pork, while occasionally present, was rare. The way the meat easily separated from the bones without being unnaturally tender indicated that the ribs were grilled for a long time rather than pre-boiled. They were not freshly grilled, however, but quite certainly heated up in a microwave.

The barbecue and garlic sauces tasted industrial and did not improve the dish significantly. I quite liked the roasted potatoes, however, though realizing that they must have swum in a huge amount of cooking oil and could not be healthy.

Although I was almost alone in the restaurant when I arrived around 15:00, people slowly started to appear afterwards, and weirdly all of them had a dog or two with them. Most of the dogs were wailing pitifully while their owners gulped their enormous plejskavicas, and I had a great temptation of offering them a few bones left from my ribs. On the other hand, looking at the owners, I suspected they would have picked them up, wrapped in an aluminium foil and taken home for later.