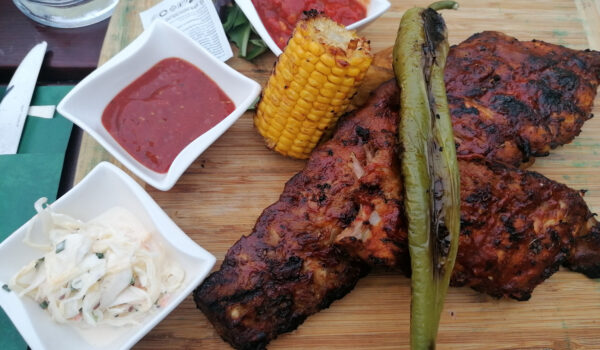 Perhaps I do not understand the purpose of marinating meat. Perhaps the real goal of marination is to remove any trace of the source animal from the meat’s taste. If that is the case, NEUERWirt has succeeded beautifully. The ribs it served did not taste of anything at all, not even of burn, despite having been freshly grilled and looking appetizingly dark.

For whatever naïve reason, however, I like to think of a marinade as something to introduce interesting new flavors, and in that respect NEUERWirt disappoints. The restaurant tried to compensate by offering unusually hot sauces and an enormous spicy green pepper, but the ribs themselves were deadly bland. I was quite happy that the portion was rather small, for trying to cut tiny slices of a rather tough meat using the wrong type of knife that the restaurant had provided was quite an effort. On the other hand, the price tag was high enough to question the value of all of that.

NEUERWirt is nice because of the friendly service and a good view over the Alte Donau, but the spare ribs – if what I ate today was typical – are best avoided.