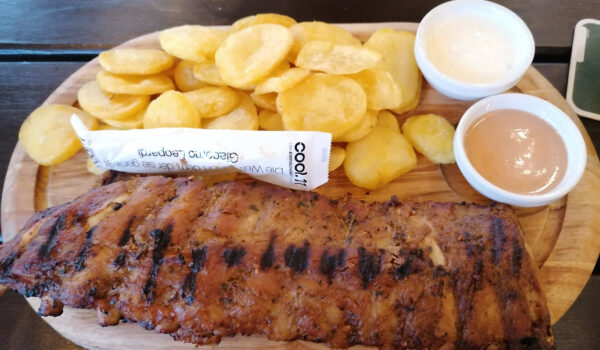 Every pork-eating tourist coming to Vienna must visit the Schweizerhaus in Prater. This is almost as important as getting drunk at a Heuriger and infinitely more important than going to the opera. Not only is the Schweizerhaus’s Stelze (pork knuckle) very tasty (there is one less-known restaurant in Vienna that makes it better, but I won’t tell you the name), but also the entire experience of eating tons of unhealthy food with horseradish, mustard, cabbage salad, beer radish and liters of beer is both highly barbarian and fantastic.

While tourists go to the Schweizerhaus, most Austrians go to the nearby Luftburg, which is operated by the same family and serves the same food and more. While less famous, the Luftburg is larger and, in my opinion, less stressy. While a single visit to the Schweizerhaus would be enough for a year or even more, I can easily see myself eating at the Luftburg whenever the opportunity comes up. In fact, this winter it served me one of the best take-home geese. Unlike its more known brother, the Luftburg also serves spare ribs, trying which was the main goal of my today’s visit.

All in all, I was satisfied, even happy. The ribs bore more than a slight resemblance to the offering of the Strandcafé after its first reopening four years ago. The meat looked slightly burned at places and tasted accordingly, while the sauces were clearly influenced by the legendary “white” and “red” of the Strandcafé. The “pink” of the Luftburg did not quite reach the strong taste of the “red” – maybe the cook was afraid to be accused of plagiarism, – but it possessed its own pleasant flavor and was surely homemade.

The main difference was in the texture of the meat. The ribs at the Luftburg created an impression of having being pre-boiled and maybe kept boiling for a bit too long. The meat separated from the bones a touch too easily and could also be taken apart with a fork alone. I would have preferred more “toughness,” but that’s a matter of taste.

My expectation were high, so the good quality did not come as a surprise, but the Luftburg is clearly one of the better places to eat spare ribs in Vienna. Coming back for me is a question of “when” and not “if,” and next time I might even order beer radish and a cabbage salad as side dishes.