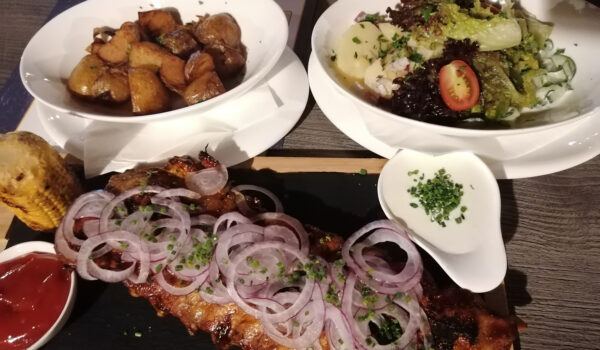 As the waitress was approaching my table with a tray, I could smell the spare ribs before I could see them and for a moment thought that the restaurant had made a mistake and grilled me a sausage instead. The smell was definitely smoke-y and sausage-y.

There was no mistake, of course, but the taste and the texture of the meat hinted that some smoking had taken place. Either that, or the cook had used some really special marinade.

After the boring spare ribs of the recent weeks, eating something unusual like this was extremely welcome. So welcome, in fact, that I could easily forgive Schloss Essling’s other imperfections, such as the overcooked potatoes and a very bland mixed salad. Unusually, the restaurant offers to choose two sauces out of available six, but none of them looked exciting. The garlic sauce I chose was too watery and weak for my taste, while the “bio-ketchup” didn’t reveal anything that would differentiate it from a “non-bio” one. And really, could not the cook decide on the sauces that go best with the dish? Why leave such an important decision to the customers?

Still, I quite enjoyed Schloss Essling on the merits of the spare ribs alone. It’s also nice to be able to select between large and small portions, even if the price difference is insubstantial.