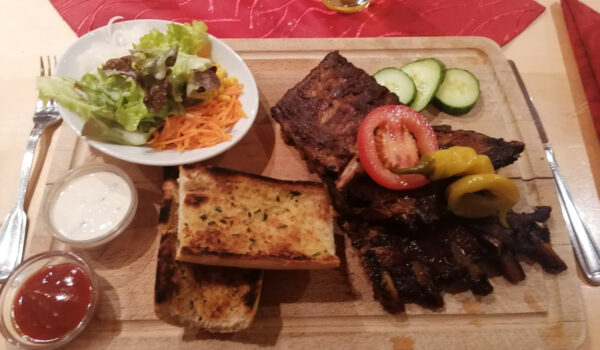 I confess: I opened Google and searched for “spare ribs innsbruck.” Of course, the helpful TripAdvisor made sure that its article, unambiguously named “THE BEST Ribs in Innsbruck (Updated August 2021)” came up first, recommending me to go to the Fischerhäusl, a small restaurant just a few minutes away from the Golden Roof. What the page article did not tell me, of course, was whether Innsbruck had any good spare ribs to choose the best from. I should have also realized that a high rating on TripAdvisor primarily means that many tourists go to the restaurant, which is not at all surprising when the restaurant is so close to the Golden Roof.

Yes, the Fischerhäusl is extremely touristic. It is located in an old building and is quite appealing inside, but in its heart, it is a tourist-processing machine. People come, struggle with the menu, order a Schnitzel or a Gröstl at the end, and pay and leave very quickly, releasing the table for the next tourist waiting downstairs at the bar. The main waiter is lively, constantly making jokes and making the foreigners entertained. Trying to be funny day after day must require hard work, so my full respect goes to him, especially since he was attentive enough to realize when people wanted food and not jokes, like it was in the case with me.

The ribs were bad: totally dry to the point where one is not sure where the meat ends and the bone starts. They did not taste of anything by themselves, instead just dripping fat. The taste came from the two sauces, an adequate garlic one, and a red sauce that tasted like a mix of ketchup with some shampoo. Truly, the flavor was that of an artificial perfume. Far from being great, that sauce at least brought some excitement to an otherwise dead dish.

The sides included a salad (normally cabbage, but I took a mixed one) and two slices of garlic bread, which is a very lazy sort of side dish. How on earth does one expect a normal person to eat spare ribs with a garlic bread? Should I put the ribs on the bread sandwich-like and break my teeth biting into a bone? Or should I spend ages removing the meat from the bones, stuff it between two slices of bread and eat like a burger?

The lesson is, don’t trust the TripAdvisor. Do some more serious research, if you can. Or simply read this site. Flo Jos, for example, is not perfect but serves vastly superior ribs and is actually a bit closer to the Golder Roof.