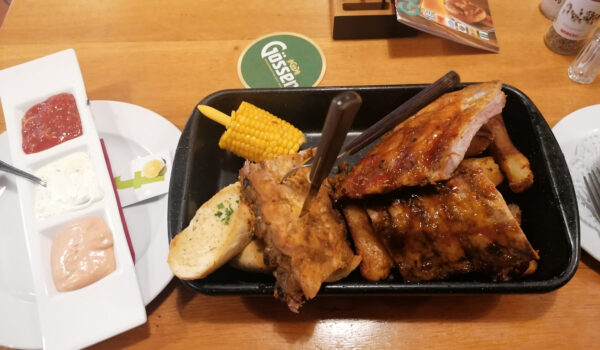 Let’s put things straight: I don’t like Salzburg. I am a big fan of the federal state, the Salzgburgerland, but I find its capital cold, gloomy and deadly boring. Apart from the definitely impressive Hohensalzburg fortress, the pleasant but overrated Kapuzinerberg, and a handful of picturesque streets, it is a rather characterless city, with a compact touristic center giving way to an ugly industrial neighborhood the minute you make a step in a wrong direction. Some people say that Innsbruck is depressing; for me, compared to Salzburg, it’s the world center of entertainment.

The Bierheuriger, which I visited during my short Zwischenstopp on the way from St. Gilgen to Vienna, is located at the foot of the Kapuzinerberg, exactly at the border between “nice” and “ugly.” It is far enough from the main tourist attractions to guarantee that only the most beer-obsessed foreigners reach it. Besides, the hugely annoying rain that had been pouring the whole morning ensured that by the time I reached the restaurant, its quite inviting shady garden was closed, while the rooms inside only contained local families having their Sunday “family-building” events.

The Bierheuriger’s focus, as I could observe from my order and from the dishes of the customers nearby, is strongly on quantity rather than quality. The portions were enormous, and even the individual ingredients, like the baked potatoes in my case, were gargantuan. As for the ribs, the restaurant serves three types: “classic” (garlic-marinated), stupidly named “spare” (with a honey-chili marinade) and “exotic” (marinated with a mango-chutney). Not expecting to visit Salzburg any time soon, I went for the safest option and ordered a “mixed” plate, containing all the three variations.

Only one of them – I suppose the honey-chili one – had a strong taste, which made it quite enjoyable. I found the other two types extremely similar and plain: basically, pieces of underspiced pork meat with bones in them. The meat quality did not impress me at all (even in the spiciest of the racks); it always gave the impression of toughness at the first bite, making unpleasant noises as if having too much fat, but then gave up quickly, turning into something that no sauces could significantly improve.

Not that the sauces were really capable of improving anything. The garlic and the cocktail sauces were of the standard industrial kinds, and only the hot red sauce had some taste and a chance of having been home-made.

It took me a long time to defeat the dish, and at the end the victory did not bring me any satisfaction, just a very very full stomach. I can only recommend the Bierheuriger if you are extremely hungry and thirsty, and even then only if you happen to be in the area for some strange reason.