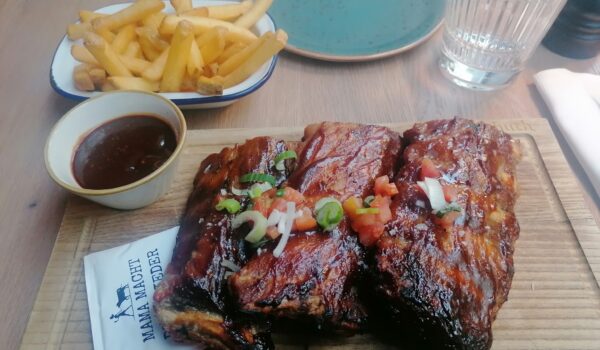 The Huth family seems to be very good at taking over or opening restaurants –Schellinggasse alone has four of them side-by-side, each with different specialties. I came across Max Grillhouse when reading a few lists with recommendations for the best ribs places in town, and until today, it remained the only place I had not visited.

Max Grillhouse is a smallish, darkish restaurant that screams “we are not cheap but we are good.” It has a good selection of steaks and burgers, and the presentation of dishes, which I observed while waiting for the ribs, is very professional. The spare ribs, too, were nicely presented, having a healthy color (if the word “healthy” can apply to a piece of dead pig) and with some finely sliced onions and tomatoes on the top.

As it turned out, the vegetables were not only for the decoration but were part of a transparent sauce, which, when combined with the meat, improved its taste tenfold. But even without the vegetables, the meat was very enjoyable, especially in the beginning. The quality of the meat was outstanding – not a piece of fat or cartilage or annoying “skin” that many spare ribs suffer from, – and it was expertly cooked: the meat was easy to remove from the bones, yet it was not overcooked to turn into pulled pork. The supplied BBQ sauce was not strong and was adding “deepness” to the taste of pork rather than dominating over it.

The only problem was that the meat got dry very quickly. Or, perhaps, I eventually started noticing that it was quite dry and plain under the tasty marinated crust. Still, I believe that Max’s appearance on the “best of” lists is well-deserved. Its spare ribs may not be the best in Vienna, but then I would be struggling to say where the best ones are.