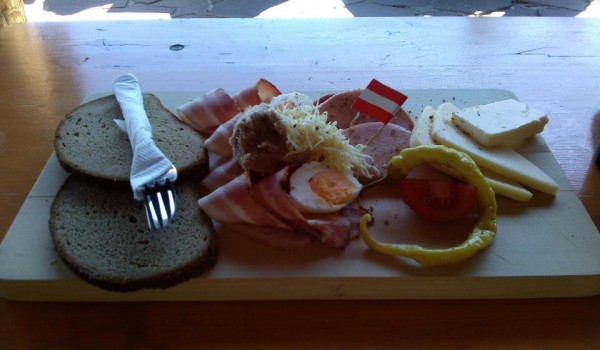 It truly pains me (actually it does not, but it sounds good) to give a lower-than-average rating for atmosphere/service to a restaurant that is supposed to be located at one of the most picturesque locations, mere minutes by foot from the famous Spiegelsee (quite a few minutes, to tell the truth). It pains me even more (am I getting over-dramatic?), because it really isn’t their fault. It’s just that some intelligent man has decided that the cable car to the Reiteralm must operate only once per week on Fridays. Hence crowds of people, stressed waiters, lack of seats and general mess. It took 15 minutes to catch a waitress; the dish arrived before the beer; the second ordered beer did not arrive at all. The dish was delivered by a kid who was not allowed to take another order or – god forbid – accept payment, etc.

The Brettljause itself came on a huge piece of wood and featured, in the order of decreasing taste, butter, Speck, some Schmalz (that could have been Verhackertes actually), salami-type sausage, Extrawurst, cheese and a small Austrian flag (OK, I didn’t taste the latter). Everything except Speck and, obviously, Schmalz came in thick pieces, improving the overall effect tremendously. Unfortunately the suspicion of all this coming from a supermarket has never left me, especially since the restaurant made no effort to present itself as a “local producer.” On a plus side, the Brettljause contained a whole egg (!) together with the obligatory tomato slice, horseradish, pickled cucumber and a Pfefferoni. There was no mustard in sight, raising the suspicion that maybe real Brettljausen don’t need mustard. All in all, this was somewhat of a disappointment, though on a different day, with less people and no cable car to catch, the experience could have been much more enjoyable.