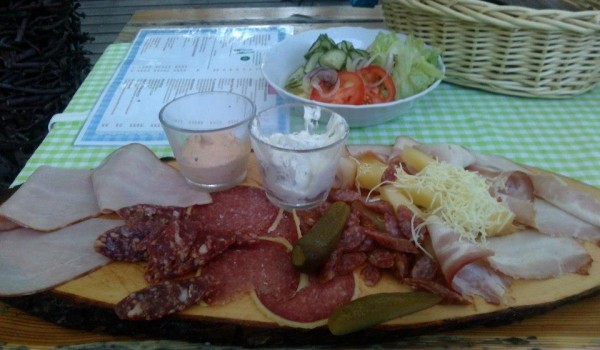 There is something wrong about a warm Brettljause. OK, some types of hard salty sausage do not require a refrigerator. Nor does Speck, really. But cheese certainly does, as well as ham. That’s why this particular Brettljause (sorry, Jausenbrettl) tasted weird. Especially since the beer and the salad were cold, as expected.

At least the piece of wood was big. So big, in fact, that the slices of meat looked rather lonely on it, although quantity-wise the dish was absolutely fine. The variety was OK, too, with some Kümmelbraten, Speck, salami with a cheese rim and two types of long salty sausages cut into small pieces. There were also two spreads (a Liptauer and a white slightly garlicky one) and a Mountain Cheese from Voralberg, which tasted like a tasteless cheese from any supermarket.

In fact, all the ingredients on the plate could have very well come from a supermarket, including the horseradish, the cucumber and the Semmeln they served instead of bread. One can’t really expect much at a super-tourist location between Kahlenberg and Leopoldsberg, and this was an example of a lack of expectations well met.