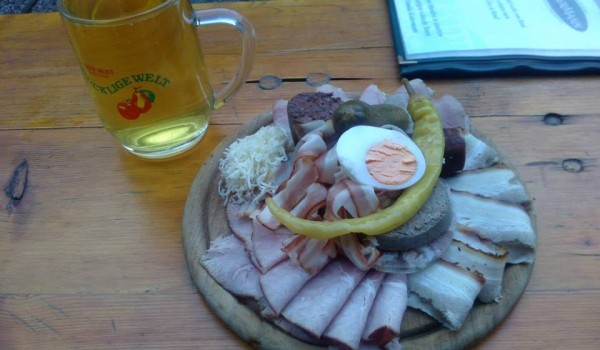 I admit I feel biased because I ate another Brettljause-like dish (at Mostheuriger Althammerhof) less than two hours before visiting Kobermann, and to be honest, I was not hungry at all. The question is, would have I finished the Kobermann’s Holzknechtplatte were I hungry? Somehow I don’t think so.

By the way, this was the first Brettljause where I could hardly finish a half. Some vital part of my body has simply said “stop here,” and I have decided to pay and leave before any further damage was done. The main problem was, the major part of this Brettljause consisted of the stuff I don’t enjoy eating on the best of the days: a liver pâté that rather than shouting to the world “I am liver” (which would have been bad enough), was quite modest in admitting its livery inferiority; a huge piece of a softish blood sausage with a thick skin looking like cellophane, and a jelly that was so old it was well past its wobbly days.

The “good” half, which I tried to leave to the end, contained some thinly cut and fatty Speck (too difficult to chew for my liking), half of a long a sausage that turned out to be a Selchwurst with rather annoying and unchewable fat bits inside, some Schweinsbraten with a thick skin that could only be a result of a long storage and two kinds of Geselchtes – one quite pinkish with a suspicious gray spot in the middle, and one simply dark pink.

Looking back at the photo now, I can even admit the dish contained some other meat types, but unfortunately they were so similar in taste that I would have troubles telling them apart. Undoubtedly, all were extremely dry, and even the supplied pickled cucumber and a Pfefferoni could not improve the experience. Finally the best ingredient was the horseradish, which I ended up eating with the home-made (but not especially fresh) bread, which I cut from a huge provided loaf.

On the other fronts, it was as if the staff at Kobermann did their best to arrange for the most authentic farm experience. The smell of cows’ shit was constantly in the air, the other visitors of the Heuriger looked like someone whose job was to move the above-mentioned shit around, and an ugly generator of some sort has decided to go up shortly after my arrival, accompanying my already uninspiring Jause with an especially annoying noise (stopping the second I have paid).

It was as authentic Jause on its own, but also the one that tried to tell me how terrible the life of the Lower Austria’s farmers is. On the occasions like this, I really feel like having an artificial and a tourist-oriented Brettljause, which I can finish without too much concern for my health. I would happily pay double the price for avoiding this kind of authenticity. Oh, and the more expensive “Tiroler Most” is simply the ordinary Most diluted with Almdudler, not some kind of a high-quality offering.