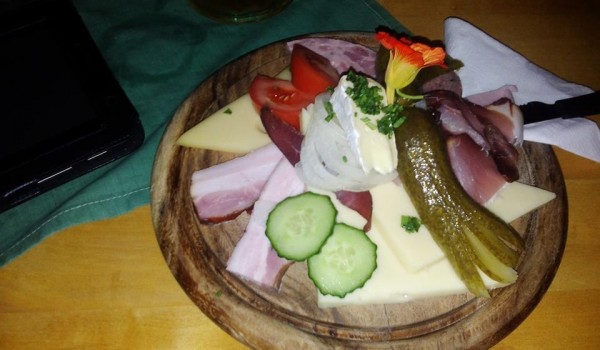 This is an example of a Brettljause that has defied expectations. The problem is, there is no way to reach the Silberkarhütte by car – there are only walking trails of varying difficulty. Well, there is also a goods-only cable car, which I hope was used for transporting the food (though it did not look very operational). If not, the people working there must be true heroes with superhuman powers, and the 10 Euros charged for the Brettljause must be a very low price indeed. Actually, they also have an almost 20 Euros Brettljause for two persons, which seems to contain additional ingredients including Verhackertes and some very special local beef sausage. If you have someone to share your Brettljause, make sure you go for the “big one.”

However even the “single user” version turned out to be much more impressive than expected. First, it had cheese – three thick slices of at least two sorts, though quite similar in taste, or, truth to be told, in the lack of one. In addition, there was a small slice of a tastier soft cheese, which in the darkness of the hut I thought was butter. Meat-wise, the Brettljause contained two types of Speck – thickly cut Bauchspeck and thinly-cut Schinkenspeck, – Extrawurst, Wiener and some pinkish sausage with darker pink spots. I am sure that the latter has a name, and I am sure that I have seen it many times in a supermarket (it could have been a Krakauer, but don’t take my word for it). In fact, I am sure I have seen all the other ingredients of this Brettljause in a supermarket too, but somehow in this particular case that does not strike as inappropriate. On the one hand, it is very likely that local supermarkets sell the meats and cheeses of local farmers. On the other hand, to get even that at such a remote location is a big surprise, especially with plenty of tomatoes, onions and cucumbers.

Unfortunately the weather on that day was anything but friendly, meaning a wet rucksack, annoying umbrella and raindrops on the camera’s lens. At the same time, this was an opportunity to sit inside the hut, which can only be described as super-nice: dark ambience, wood everywhere and tiny candles on every table. A very positive, though unexpected experience.