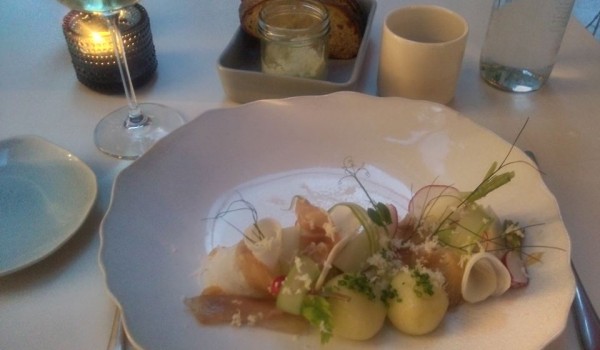 This is not a Brettljause. There is no Brettl; there is no Jause either, unless your concept of a Jause consists of a few extra-thin slices of Speck mixed with vegetables, mostly radish in various forms – from fresh and whole to shred. To be fair, there are also two tiny warm potato dumplings, which are 90% potato and 10% something that could have been meat, had it been bigger to recognize.

What we have here is a starter in a rather expensive restaurant, which was given a totally inappropriate name. Were it called anything but Brettljause, I would not have complained a minute. I would have even praised it for being quite original and tasty (but greatly overpriced). With this name, however, it has to be evaluated as a Brettljause, and the outcome can be nothing but disastrous. In a country that uses Brettljausen as a selling point for tourism, such a blatant misuse of the word must be forbidden by the Constitution.