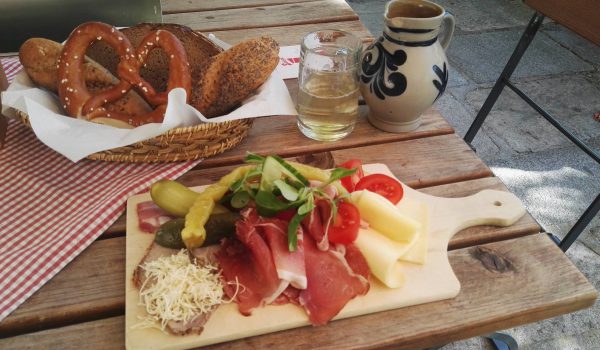 The town of Ebensee in Upper Austria is mostly known for its closeness to a seriously beautiful lake (Traunsee), its skiing mountain reachable with a cable car and the horrific Nazi concentration camp that was located there during the war. Nowadays, Ebensee is a quieter kind of a tourist location, living in the shadow of nearby super-touristic Bad Ischl and Halstatt.

I bet not many tourists know about the Mostschenke, however, because it is situated as far from the tourist center as imaginable, next to the Hotel Hochsteg-Gütl, which owns it. Actually, the Mostschenke doubles as the hotel’s restaurant, so its dishes are one level above what is normally expected from a Mostheuriger. It also has a very green, very shady and very quiet garden, which is perfect for a glass of wine (or Most) on a warm day. When I say “very quiet,” I should probably add “as long as no wedding takes place,” because today the garden was full of people in traditional dresses, singing traditional songs rather badly.

The Brettljause, like the other dishes, is one notch more sophisticated than usual. To start with, it’s really nicely presented, with different types of bread in a basket and fresh butter on a separate plate. The meats include two types of Speck, a single slice of well-prepared Schweinsbraten and, uncommonly, a few slices of thinly cut cold Leberkäse. There seemed to be three types of cheese on the plate, but two of them had a very similar taste of nothing. The third one, however, was a very enjoyable “mountain cheese” (Bergkäse).

On the quantity side, it was a smallish Jause, and a couple more sausage types, some spreads and perhaps a slice of some strong soft cheese would not have hurt (and would have raised my final rating substantially). However, even the way the dish stands, visiting the Mostschenke is a viable alternative to eating a Brettljause in one of the huts on the top of the mountain, minus the view.