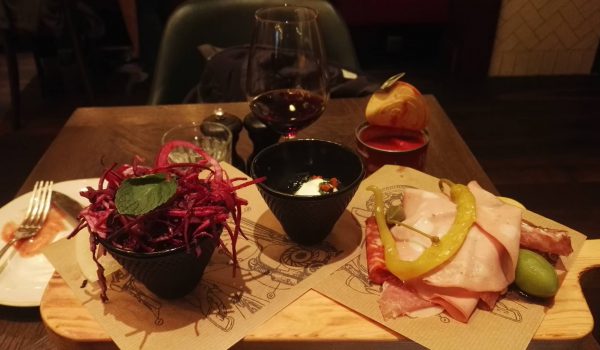 Five minutes after taking my order, a friendly but a bit overstressed waitress of Jamie’s brought me an empty plate, silverware, salt, pepper and two cans of Italian tomatoes. The cans made me slightly suspicious, especially since they were positively two identical cans. Still, Jamie Oliver was supposed to be a simple, down-to-earth guy, and surely such a weird “greeting from the kitchen” could be a somewhat extravagant but amusing way to spare the time waiting for the “famous plank,” as the restaurant’s menu called its take on a Brettljause. Still, it took me a while until the hunger won over the hesitation, and I finally opened one of the cans, poured the content onto the plate and quickly swallowed it with the salt and pepper. It tasted of salt and pepper.

To her credit, the waitress, coming out of the kitchen with my dish, did not appear at all surprised and, having pulled another can seemingly out of nowhere, placed it in front of me, at some distance from the unopened one, and then put the plank on top of them. Although the resulting structure looked shaky, highly inconvenient and plain ridiculous, I suppose I should have felt embarrassed, but the moment of awkwardness swiftly got replaced by a shock as I examined the plank’s content.

The following description has been copied and pasted from the restaurant’s website: “Fennel salami, pistachio mortadella, prosciutto & schiacciata piccante, served with mini buffalo mozzarella, pecorino & chili jam, a selection of pickles, olives & crunchy vegetable slaw.” Strictly speaking, it lists all the ingredients very accurately, missing only one key point: each of them was represented on the “famous plank” as a single piece. That is, a single slice of each type of meat, a single slice of pecorino and a single tiny ball of mozzarella. The only reason there were two olives was because one was black and the other was green. The “selection of pickles” included exactly one pepper and one caper. It looked almost surreal and any regret I had for having eaten the tomatoes evaporated in mere seconds. Which was incidentally the time I needed to finish everything on the plank.

I cannot even say whether the meats and the cheeses were good or not, since to recognize and appreciate the taste requires a certain minimal quantity, which was completely missing in this case. Worse still, the restaurant did nothing to encourage me to eat slower and enjoy the ambiance. It was noisy, cramped and annoyingly decorated; the tables stood far too close to each other and the flow of people was such that I had a constant feeling of blocking someone’s way.

In case you are wondering, they did not charge me for the consumed can. (They did, however, charge me 2.5 Euro for the French fries with fresh garlic, which were brought together with my 17.5 Euro burger.) Therefore, if one day by some evil touch of fate, you have no choice but to dine at Jamie’s Italian, make sure you open and eat as many cans of tomatoes as possible. But please don’t forget to check the expiry date beforehand.