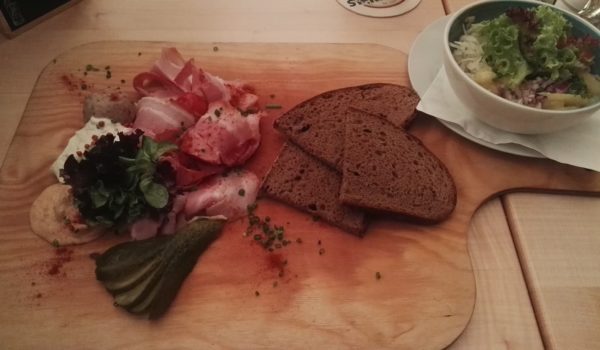 Had there been a Brettljause award for the biggest wooden board, the dish of Sternberg would have won it straight away. The Brettl was so huge that when I saw it for the first time, I suspected that the waitress had decided to bring me a half-finished Brettljause of someone else. It was only when I noticed a completely intact ball of spread did I understand that the bizarre waste of the board’s space was in fact the cook’s failed attempt at design.

Alas, there is no such award, and there is very little positive that can be said about the Brettljause of Sternberg otherwise. Most of it consists of slices of boring supermarket Speck, served with the warm slices of bread that are normally used for toasts (and thus do not have to be fresh). The two spreads – the Liptauer and the cottage cheese ones – win not so much by their own taste but by the taste of the red pepper scattered over them. To be honest, the pepper adds quite a lot, and I wish more Brettljause providers had discovered it. Finally, the wonderfully salted and spiced Verhackertes was the highpoint of the Jause, and I only wish I did not have to spoil it by spreading it over such a boring bread.

I can understand why the recently re-opened Sternberg, being the only acceptable restaurant in the otherwise restaurant-poor area, manages to attract so many people (and be rather noisy and stressy as a result). If you go there, make sure that the weather is nice enough so that you can enjoy the restaurant’s rather cozy garden. Order something other than the Brettljause, however.

And, as a final advice to whoever is convinced that empty space is key to design when it comes to Brettljausen: make sure that you wash your boards thoroughly before you serve them. Otherwise, the reddish color left on your Brettl can make one think that some animal had been slaughtered on it.