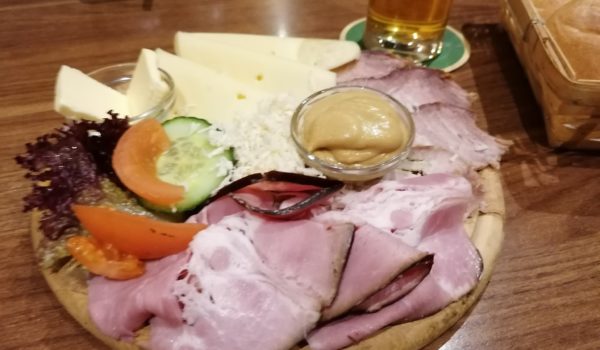 Despite my undying love for Brettljausen, there are certain kinds of Brettljause restaurants that I would think twice before entering. One would be a dark, shabby-looking establishment that is empty apart from a drunk nourishing his wine glass at the bar and a couple of elderly customers at a table, one of them eating a soup while the other doing all the talking. And all that at dinner time on a Saturday. The other type would be a restaurant dedicating its entire wall to a “Hall of Fame: Employees of the Month” display.

Incredibly, the Dresdnerhof managed to be both of these. While its emptiness did not particularly surprise me – its location on a busy street in a non-tourist district would rather suggest its doing most of the business at lunchtime on working days – the Hall of Fame was definitely a novel experience. Even weirder was that the display featured photos of ten people, while the entire staff I witnessed was a bored waitress at the bar. Supposedly, there was a cook in the kitchen, too, but I did not have a chance to verify that, for my Jause and the mixed salad did not require any special skills to be made.

Still, my expectations were almost non-existent, especially considering the Brettljause’s ridiculously low price of 4.60 euros. I was hardly expecting to receive anything more sophisticated than a plate with a couple of Extrawurst slices, so when I saw a genuine wooden board with cheese, Schweinsbraten, Geselchtes, and a lot of mustard and horseradish on it, I felt deeply relieved and more than a little surprised.

What is good then? Oh no, of course it wasn’t. Two types of meat and a boring cheese do not constitute a lot of variety, and two white bread rolls that came with the Brettljause (at extra cost) would have been more appropriate for breakfast. What I eventually did was to cut each roll in half, and put butter, mustard, horseradish, the meats and the cheese in the middle, thus creating two simple sandwiches. The mustard and the horseradish were pleasantly strong, but otherwise the result was identical to what I would have easily prepared for breakfast myself after a brief visit to a supermarket. Except that for breakfast I would have probably used coffee instead of beer.