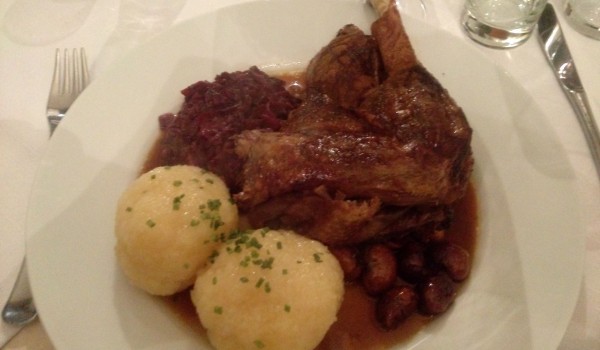 This was a goose suffering from high expectations. First, Zwischenbrückenwirt has a real chef, known from cooking for other restaurants and doing it very well. Second, they only cook a goose upon demand, which is always a good sign.

The first bells started to ring when they brought the dish half an hour after our arrival, which was anyway almost half an hour too late. From some folks that know about geese (who work at Schiefer Giebel, the home of the best Viennese Martinigansl), I learned that a goose has to be served punctually, lest it gets dry. And dry it got, though with a few minutes delay. The first few bites were quite sensational: crispy on the outside, tender on the inside, with the amazingly crunchy red cabbage and a potato dumpling, while sticky, at least having some taste. It is a shame that the closer I got to the bone, the tougher the bird became. Astonishingly, the chestnuts accompanying the goose seemed to follow the pattern even stronger: the first one was amazingly good, while the later, colder ones bordered on being disgusting. And the sauce ran out before even a half of the goose was consumed.

Mind you, we are still talking of a seriously good goose here – the best one this season, Schiefer Giebel’s bird aside, and a bigger one, too. It could have been better, though, but the deficiencies are easily forgotten when comparing it to this year’s mediocre offerings elsewhere.