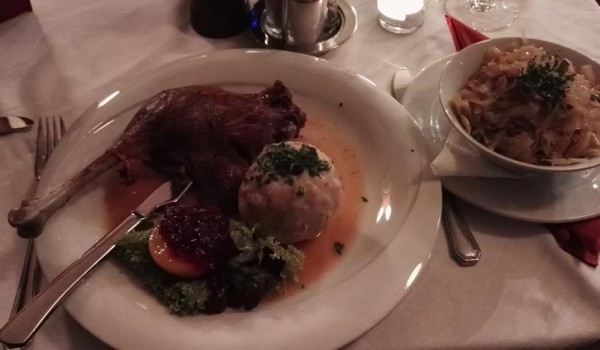 This year the Viennese authorities made a little-advertised decision that caused me to literally scream “Finally!” Without much fuss, they left some of the Christmas markets open until after Christmas. Here is something I can only applaud to, as the sight of the markets disintegrating around 14:00 on 24th of December has always made me sad. It is just unfortunate that the authorities have also totally failed in informing the rest of the population about their decision, leaving the markets almost empty. They have also somehow managed to replace many of the Austrian sellers at the Bazaars’ stands with the Roma, an observation that could have been very politically incorrect, had it not been completely true. I suppose the Austrians took the holidays off to celebrate with their families.

I don’t know if a similar undisclosed decision has been made to extend the Martinigansl period, but the fact is, I continue to see leftover geese all around the city. The one at Fromme Helene was the next one in the line, even though hidden behind the „Christmas goose“ name. Still, more and more I think that the “Christmas geese” are in fact the Martinigeese that have failed to get sold in November and are currently on offer for unsuspecting tourists. I wonder what happens if these fail to sell, too. Easter geese, anyone?

Speculations aside, this was one tough bird, served so small that I started to think it had something to do with me arriving without reservation and having just one hour to eat and leave. The meat was dry and tough, the skin rubbery to the point that I stopped even trying to chew it, and the yellowish sauce as insufficient as inappropriate. On a positive note, the bread dumpling had a bit of taste, as if some subtle spices were injected into it by mistake. The cabbage – I ordered the white one with Speck rather than the standard red one, which was also available – was quite acceptable, but sadly too abundant for such a small goose.

Based on this goose alone I wonder how Fromme Helene managed to earn even one fork of the Falstaff guide. It’s a pleasant restaurant at a nice location close to the city center, and the service is very friendly, but going there and eating a goose to celebrate Christmas sounds almost sacrilegious.