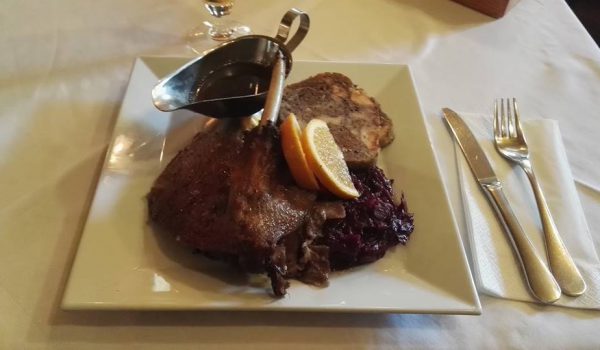 Wouldn’t it be nice to make a spot decision on the way to the office on a Sunday (yes, that happens, unfortunately), walk into a restaurant, find that it serves goose without a reservation on that particular day only, and then eat a bird that may very well be the best one this season? Well, this has just happened to me.

I am lying about the spot decision, of course. The idea had been growing in my mind since the morning; it just reached the critical mass at exactly the moment I was close to the restaurant. Which wasn’t just any restaurant, of course, but the one whose goose I saw on Foodspotting the day before, and the one I’ve known for many years without being especially excited about.

I am not lying, however, that the goose was good. I do like when the sauce is served separately, because that creates the impression of extra thought and effort. I also like when the cabbage is crunchy but neither too sweet nor overloaded with Cinnamon. I generally prefer bread dumplings to potato dumplings, even though I largely dislike dumplings, but the bread dumplings of Silberwirt actually had some taste and, unusually, contained sunflower seeds. They were very dry at the start, but quickly became better when soaked in the sauce.

And the goose itself was almost perfect, looking a bit small at a first glance but actually containing enough meat not to leave the table hungry. Judging by the taste, it must have been rather freshly made (meaning the same day), and all the improvements I could think of – juicier meat, crunchier skin and some burnt bits – could have only be possible with a special oven, which Silberwirt obviously does not possess.