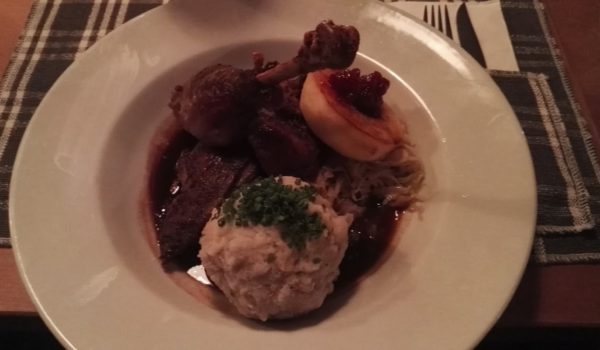 I know very little about cooking geese. Let’s face it, I know very little about cooking in general. I do know, however, that “roasted” and “braised” refer to two rather different methods of preparing meat, the latter involving liquid, while the former relying on dry heat. As far as I am concerned, all the traditional Austrian geese are roasted. For that reason, I got curious (and a little bit scared) when I saw the Kaisermühle’s menu advertising a “geschmortes,” i.e. braised Martinigansl.

Fortunately, the end result still looked like a goose and not a goulash. I would be hard pressed to tell the difference, in fact. The crispy skin indicated that a bit of roasting had taken place during the goose’s final minutes in the oven, and all the usual ingredients –  cabbage, dumpling, apple, berries and sauce – were in place. It is only when biting into the meat that the slight difference became apparent: the meat lacked the usual texture; it felt like something that was shredded and then put back together. Actually, the texture resembled that of a chicken breast, but the color of the meat was light gray instead of white.

I cannot say that the taste was bad – quite the opposite, the goose itself tasted better than average. I was much less convinced about the sauce: it was too thick and too alcohol-spiced to match the goose. The cook also made a strange decision of serving all the ingredients in the same deep plate, resulting in the cabbage’s soaking in the sauce even before I could try it. While that would probably work better with red cabbage, a lukewarm white cabbage with bacon slices looked and tasted peculiar when mixed with the sauce.

To its credit, the restaurant offers to choose between red and white cabbage, as well as between potato and break dumplings. Being tired of the rubbery potato dumplings, I went for the bread one and ended up with something extremely bland and strangely unable to absorb the sauce.

Ultimately, these little annoyances were enough to reduce the overall pleasure. Now I know that there is nothing inherently wrong with braised geese. However, old-fashioned as I am, I would still go for a roasted one, given the choice.