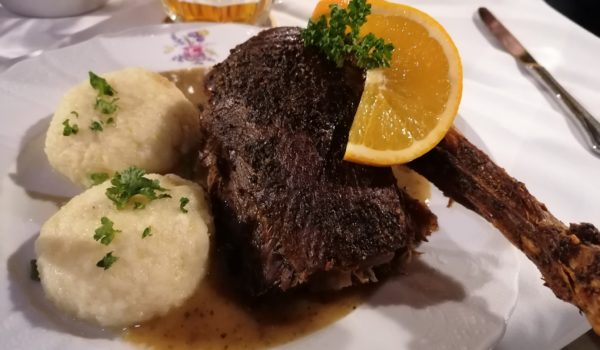 If you want to try a goose – or anything else for that matter – at the Kuchl, you better reserve in advance. This Czech restaurant in the 8th district not far from the Votivkirche seems to be nearly always full – partly because it’s so small that filling it up does not require a lot of people and partly because it’s really cozy and friendly.

Consequently, my expectations for this Gansl dinner were quite high, and I am glad to report that my visit was not a major disappointment. It was a comparatively minor one.

The only problem worth mentioning was the goose itself, which had all the attributes of having been pre-cooked and later warmed up. The pre-cooking is not an issue by itself – after all, 99.9% of geese in Vienna are served that way – but in the Kuchl’s case, the signs were a bit too evident. The skin manifested only faint traces of its original crispiness, and the meat was on the dry side. Fortunately, the bird came on a plate with a thick salty sauce (obviously cooked separately from the goose), which hid the dryness of the meat quite well, at least for as long as the sauce lasted (which was not very long). It even added some taste to the otherwise completely bland dumpling. The red cabbage, however, was first-class – not spiced in any unusual way, but pleasantly crunchy and neither too sweet nor too sour.

I cannot say that Zur böhmischen Kuchl is a must-visit Gansl place, not even if each season you eat the same crazy number of geese as I. The goose there is still above average, nevertheless, and the friendliness of the service and the snug atmosphere are way above the average.