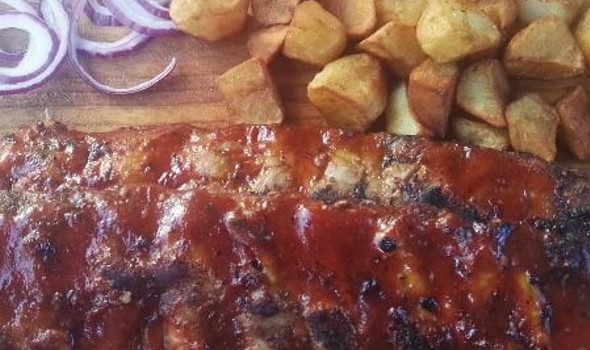 With the 22nd district of Vienna being notoriously poor in term of restaurants, Gasthaus Schina can be considered an institution with a long history. It’s very local, it’s not especially cozy or friendly, and it serves huge portions of whatever you order.

My spare ribs were not only huge – they were actually good. Although probably having the same wholesaler origins as 90% of other Viennese ribs, these were well marinated and did not taste of pig. The meat was easy to remove from the bones (a possible sign of pre-boiling), and the meat-to-bone ratio could easily beat the ribs of most of the competitors. The membrane, or silverskin, was unfortunately quite prominent and unpleasant to chew, so after trying a few ribs I started to deliberately remove it.

The other negative side – which may actually be positive depending on your taste – was the abundance of grease. I very rarely touch spare ribs with my hands (unless that is the only way to pull the meat off), but in this case I would not dare even thinking of that. The amount of fat on the ribs would require tons of napkins to get rid of.

Despite all that, as I said, the ribs were good. The potatoes and the cabbage salad they came with were absolutely fine, and out of the three sauces, two – a very garlicky white one and the mustard with onions – did not taste particularly industrial. If you do not mind the slight strangeness of the owners/waiters and the “too local” ambiance, Schina is a perfectly good place to visit when you are hungry.