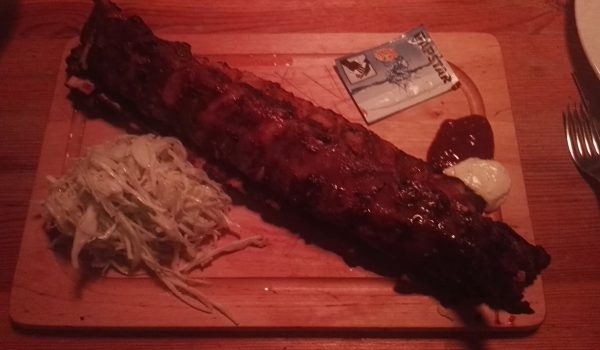 A bit of history first. Once upon a time, there was a place called Strandcafe, which served spare ribs. It’s the place where I tried the first spare ribs of my life, and where I have been fifty times at least. To say that there the spare ribs were good would be like saying that Vatican is a nice place to practice Christianity; it’s almost sacrilegious. They had good days and they had bad days, but on the good days their ribs were the pure definition of what ribs should be like; I never dared reviewing them because they were the gauge all the other ribs were supposed to be measured against.

Then, a year and a half ago, Strandcafe was gone, fallen victim to a tricky asshole who first built an expensive house next to the restaurant and then immediately complained about the noise and the smell. Strandcafe was closed and demolished, and after a long court battle seems to be rebuilding under a new sound and smell-proof concept. Maybe it will open again; maybe it will not. Maybe it will open, but their spare ribs will never be the same, or maybe their neighbor will find another way to shut them down. I don’t know.

The main reason I am mentioning this is because Ribs of Vienna – a Polish-owned, touring-oriented establishment in the center of the city, with the name so pretentious that it took me several years to attempt eating there – has exactly the same main clientele as the good old Strandcafe: the Russians and the Japanese. The second reason is that their “classic” ribs, sharing the name with the restaurant, were the nearest to the Strandcafe’s golden standards that I have tried for a long while.

The ribs were very slim – half the width of what I would have expected, and did not contain much meat at the first look, because of the unusually wide bones. There were three racks of them, however, and at the end, I was absolutely full. Both supplied sauces were excellent (the red spicy one especially), and the cabbage salad, though different from Strandcafe’s famous specialty, was unique on its own way: crunchy, but not too hard on one’s teeth.

Their dark beer, somewhat reminiscent of Strandcafe’s famous Grieskirchner, was very pleasant, too, and the whole atmosphere of the cellar – half-full on a Sunday afternoon – was comfortable and relaxing. To say the entire experience was better than expected would be an understatement; it was actually very good.

However – although this has no effect on the ratings – beware of the restaurant’s long and varied menu. There are more than a dozen types of spare rib types there, but unless you are bored or stupidly keen on experimenting, I would not recommend moving away from the classic “Ribs of Vienna.” Especially, don’t fall for their “five types for two people” offer: those ribs are much thicker, undercooked and occasionally ghastly. Stay on the safe side and avoid the peak periods (evenings, that is), and you will enjoy Ribs of Vienna more than you have ever thought.