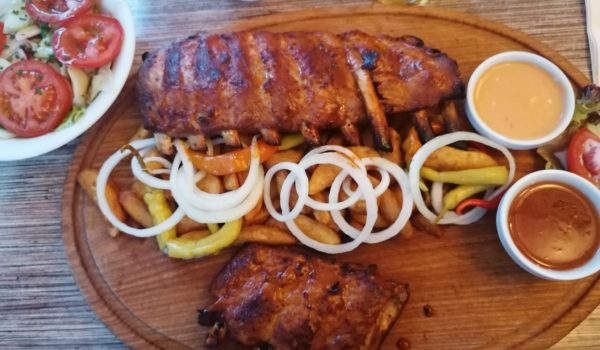 If you hear anyone complaining about how small a city Vienna is, tell them to visit Mediterrano. I would not even call its location “the ass of Vienna” (which would also be misleading because the area is rather nice). It’s the tip of Vienna’s very long tail. Really, one is surprised to hear people still speaking German around there, and finding a good Italian restaurant is nothing short of a miracle.

The restaurant looks slightly unusual, being housed in what appears very much like an expensive private villa. It has a fantastic green hidden garden, which is perfectly clean and very quiet most of the time, unless a plane heading towards the airport flies overhead (which happens, like, every ten minutes in these plane-scarce coronavirus times). The menu is very long and very Italian, although one can find a few schnitzels and cordon blues, as well as two types of spare ribs – hot and not hot – each available in two sizes.

I took the smaller version of the “not hot” ribs and found them both sufficiently large and quite spicy thanks to the accompanying peppers. The ribs looked beautiful, tasted good and were very easy to separate from the bones. They were neither fat nor burnt, did not have the annoying skin or concealed tooth-breaking bones. The roasted potatoes were also very well cooked: crispy on the outside and almost creamy inside.

If anything, the dish was too perfect, as if prepared against a very detailed tried-and-tested recipe by an extremely risk-averse cook. The majority of ribs that I have truly liked were imperfect: the little pleasures that make ribs special often come from burning them a bit too much, adding slightly more salt than necessary or marinating them in some unorthodox way. The ribs of Mediterrano were totally clean: nothing to complain about, but nothing to get excited about either. The only fault I could find with them was the sauces: the pretty standard pinkish cocktail sauce and equally industrial Chinese sweet and spicy one. Moreover, they both tasted a bit diluted, as if the cook became afraid that their taste would be too strong and watered them down.