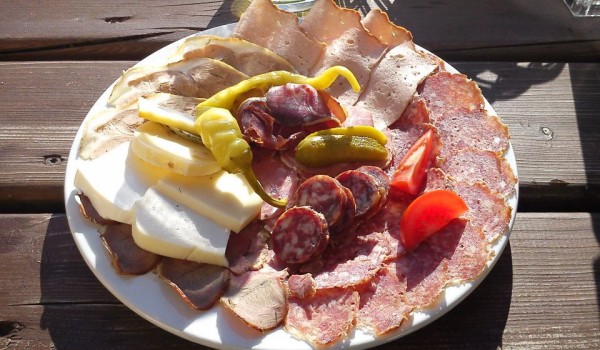 OK, it’s not really a Brettljause. They don’t even call it so. And it comes on a plate instead of a wooden plank. In all the other respects it’s indistinguishable from other BJs. The biggest selling point here is that all the stuff found on the plate comes from the owner’s own sheep production, and it’s true there is something cool in looking at the peaceful sheep in beautiful surroundings while filling the mouth with the slices of their brothers and sisters.

The variety is impressive: the plate had at least 6 types of sausage including salami, cold Braten and even Leberkäse. There were also three types of sheep cheese: a soft tasteless Mozarella-alike, a harder tasteless Emmentaler-alike, and an even harder one spiced with something tasteless. The rest was minimalist: a tiny salty cucumber and a lonely Pfefferoni, but at 5 Euros for the whole dish one cannot really complain.

Still, all these complaints (and here is one more: they have neither wine nor beer) fade out considering the amazing location, the great atmosphere and the super-friendly service of that Heuriger. I would even go there if they served sushi and mushrooms. (Well, on a second thought, maybe not.)