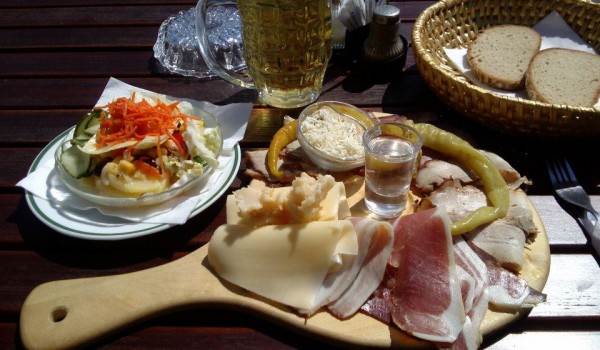 Located roughly between Weissenbach an der Triesting and Mayerling, Zobelhof is best reached with a car, because the walk is neither short nor very exciting. The hilly surroundings are nice without being beautiful (at least at this time of the year), but the Brettljause they offer makes the effort almost worthwhile.

At 6 Euro including the Schnapps, it’s a very cheap thing, even though the bread costs extra. For this money you get one of the fattest Brettljause I have ever seen. Maybe because it was hot and very sunny, every piece of meat and cheese was glittering with fat, and the salty butter-like Schmalz (with no Grammel, unfortunately) had to be eaten very quickly before it would melt.

The cheese was pretty standard, but had some taste, which is more than can be said of the cheese in 90% of other Brettljausen. The meats – I have counted at least five types of them, luckily with no blood sausage, jelly or liver around – were very authentic, tasty and fat. Very very fat – even the normally dry Schweinsbraten. The mustard and the horseradish were both present, and though two Pfefferonis were the only other “decoration,” the separately ordered salad has compensated for the lack of extras.

The only mistake was to assume that the sweet Most they serve was alcoholic. After one and a half liters I still felt nothing, but the farts that came shortly afterwards were out of this world.