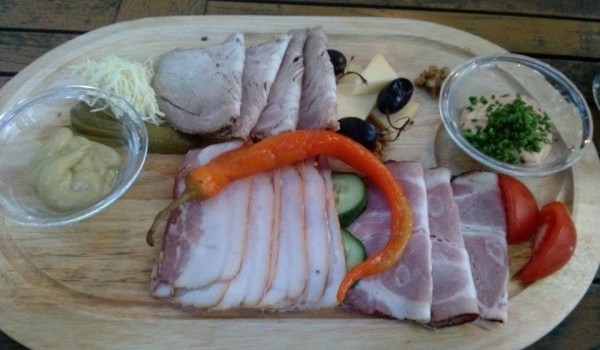 Here is a place that was probably designed as a tourist attraction but ended up being mostly frequented by Austrians, with quite a few office parties running inside. Perhaps tourists simply don’t notice it when then pass by the Schottenstift. The restaurant was quite crowded, which is better than being empty of course, but the noise level was at the critical level of annoyance. In a warmer weather, when the garden outside is open, the dining and drinking experience at the restaurant is surely considerably better.

The Brettljause was unusual. In addition to the usual stuff – Speck, cold Schweinsbraten, Geselchtes, horseradish and mustard – it featured some hard cheese, chestnuts and a few grapes. This was a welcome change, because hard cheese, unlike the sorts one usually finds in a Brettljause, had some taste. Also present was a Liptauer spread of a commendable quality. The lack of variety was compensated by the untypical thickness and freshness of the slices. They were obviously generously cut from a bigger piece just before being served. Although the slices were small in number, they were satisfyingly fat and filling.

From a place bearing no expectations, this Brettljause was a pleasant surprise. Its garden is worth another visit in summer.