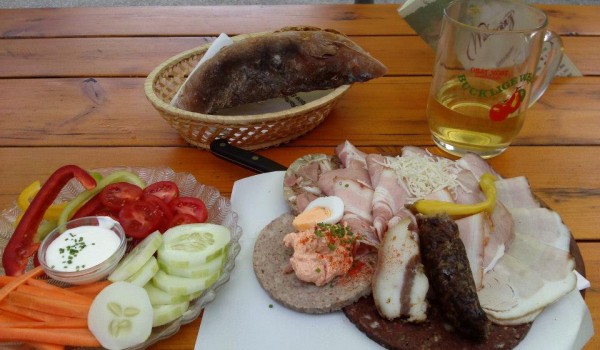 This was my second visit to this farm near Gloggnitz and the second of the two types of Brettljause served there. Unlike the “Schneebergland”-Brettljause, this one contained less sliced meat (at least at the first sight) but instead had big pieces of blood sausage, jelly and some grey thing with a taste of liver. All three were authentic but just not to my taste, so the first ten minutes or so were spent consuming them to get to the better parts.

The thick slice of bacon, with a lot of fat and non-chewable skin was a much better part, as was the dry and fat house sausage. The other ingredients – the Liptauer spread and the different meats were absolutely fine, too. At the end it was almost too much food, and ordering another serving of the house sausage was a mistake: after eating a half of it I was close to exploding. Like at the previous visit, the Brettljause was served with the home-made bread – this time with a huge loaf of it, which must have contributed to my over-eating.

Waldstranz is a very simple and easy-going Heuriger, favored by locals. It is very unlikely that a tourist would end up there, and this makes it very authentic and pleasant.