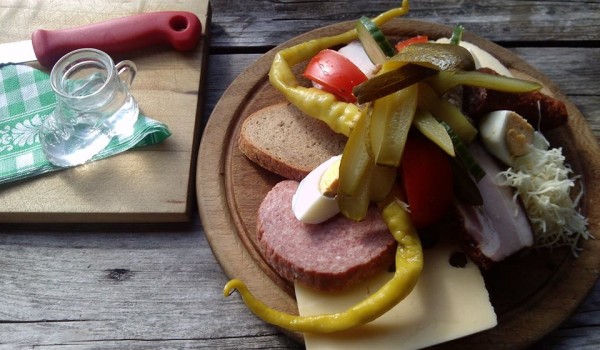 It is a pity it was so foggy because the view from the terrace of this hut towards the Schladminger Tauern must be quite impressive. Today however the hut by chance found itself right at the edge of the fog, so the Dachstein mountain behind it was perfectly visible, while the view forward was limited to a couple of playful lambs and some chickens.

Lärchbodenhütte calls itself the “urigste” hut in town, and there is a lot of truth in that. When I approached it, there was an old woman sitting on the terrace bench and knitting. She turned out to be the keeper of the place and, it seems, the waitress and the cook combined, because each time someone ordered, she would go back to the hut, spend some considerable time there and come out with the ready dish.

My Brettljause arrived on two wooden boards, the second containing nothing but a knife and a shot of Schnapps in a shoe-shaped glass. No fork was to be seen, so the authenticity gauge went a point up straight away. Also, the meats – a thick long slice of Speck, some sausage that looked like a Wiener but was more tender and less peppery, a salty and extremely good Hauswurst and a Verhackertes – must have come if not from the hut’s own farm (which I doubt, having seen only the above mentioned lambs, hens and plenty of hairy rabbits), then from a common owner who owns the hut, the farm and probably a few hotels. Cheese, which also came in thick slices and was of two types, appeared to follow some general industrial guidelines (it did look like some I have bought in supermarkets before), yet had something – texture? the way it slightly glued to the board? – that indicated it was also home-made.

The other ingredients – pickled and fresh cucumbers, horseradish, eggs, even the Pfefferoni – were simple but somehow “well designed;” there was neither too little nor too much of them, and they seemed to complement and improve every other bit I was eating with them. Even the absence of mustard did not bother much: after all, it would have probably been industrial mustard, and that would have posed quite a setback to the overall genuine experience.