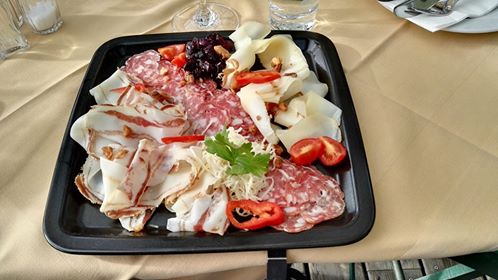 If anyone had mentioned “turopolie” to me a few days ago, I would have thought it were some kind of a rare illness, probably involving a fear of doors. As it turns out, a Turopolie – or rather Turopolje – pig is some sort of a rare long-eared and dark-spotted pig breed, coming from a Croatian village of the same name and being in danger of extinction. Well, all I can say is that my today’s Brettljause brought that extinction one step closer.

Judging by the Brettljause, it was quite a fat pig to start with; one ingredient being thinly sliced white fat, and another – the Speck – being only marginally different. Only the third ingredient, the salami, contained more meat than fat, and was the best of the three. Well, to be exact, there was a fourth one, too, a sort of Grammel (baked fat), but it was too sparse, tasteless and hard to chew to be considered seriously.

Most interestingly, the dish came with a jam made out of some berries I could not recognize. Pork and berries should not really go well together, but in this case they did, even with the horseradish added on the top.

Although the Brettljause is unusual enough to warrant Tscheppe a visit, it is the location that really makes that restaurant. The view from the terrace, facing vineyards and Slovenia is great, and the restaurant itself is very well designed and taken care of. The waitresses did appear a bit hectic, probably because of a goose dinner later today, but the poor Turopolje pig certainly did not die in vain.