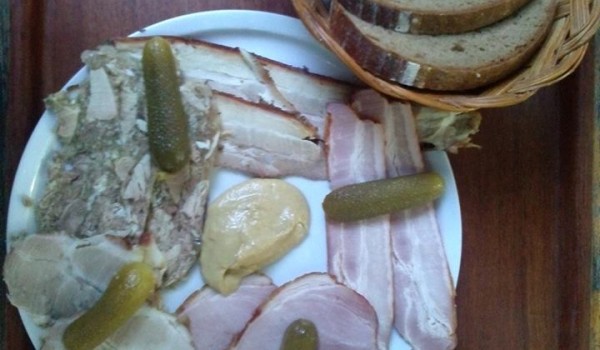 I usually like Brettljause places where they cut sausage and cheese thickly, because I think it adds to authenticity and, very often, to taste. At Uferhaus Staudigl, they cut quickly because it’s faster. For a self-service restaurant at the entrance to the National Park Lobau, speed is important.

Where the sausage and the cheese come from is obviously less important, and a supermarket seems to be a perfectly good source. The only ingredient where I had my doubts was the pork jelly, on account of its quite unappetizing appearance. It was as if they took pieces of the Schweinsbraten their previous customers could not finish, shredded them, added something green (hopefully, herbs) and jellified them. I am writing this at least two hours after leaving the restaurant, and I am still unsure if what I ate will not make me sick, so strange that jelly was.

The other ingredients, too, were strongly on the pork side, with two types of Schweinsbraten, a Geselchtes and a Bauchspeck. One kind of Schweinsbraten had been roasted and then served cold; everything else came from supermarket’s plastic wraps. Two pickled cucumbers and quite a lot of industrial mustard were the only other things to decorate the plate.

I could not finish this Brettljause, getting more bored than full, and realizing at one point that the thing I was enjoying most was the cold Stiegl beer from a bottle. And normally I don’t even like Stiegl.