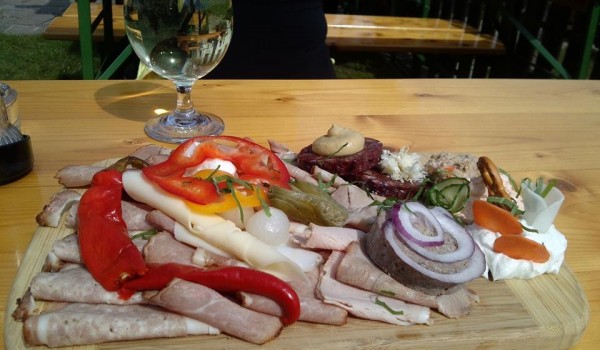 No, you don’t get pita bread and hummus here, and there is plenty of pork on the Brettl to scare off any Arab or Jew who would pass by this unexceptional village half way between Krems and Dürnstein (if you walk over the hills, which most people, stupidly, don’t). What I mean is that you have to eat this Brettljause the Arab way, from right to left. Eat it as a European would, and you will be left deeply disappointed. Eat it the correct way, and you, like me, would happily give it the score of 6 out of 10 and remain wondering if 7 would not have been a more appropriate choice.

I was fortunate because I always eat the stuff I don’t like first, so it was absolutely natural for me to start with the blood sausage. Now, no matter how most of us dislike blood sausages, we can still quite easily eat them because, as a rule, they have nothing even distantly resembling blood inside. The Emberger’s blood sausage is different: it is the first time I cut the sausage and saw bright red bits. The taste, too, was nothing like the slighty tough and always cold thing you get elsewhere; oh no, it was tender to the point of tasting uncooked, while some parts had, unexplainably, a tougher texture, making me wish to cover the whole thing in mustard and horseradish and swallow it whole, washing it down with the rather tasteless white wine.

Staying on the rightmost side of the Brettl, a thick slice of a liver sausage tasted very liver-y. The mustard and horsehadish gone on that point (wasted on the blood sausage), I was left with a red Pfefferoni to somehow subside the taste, and, being unexpectedly hot, it turned out much more effective that I had thought. Then, there were three types of spread – a creamy white one, some papriky Liptauer and a meaty Verhackertes – none of them sporting much taste (which was sort of a relief after the blood and liver experiences). Fortunately, the owner served a cheese-filled bread, which made the spreads taste less boring than they actually were.

From that point, moving leftwards, things started to improve gradually. The Schweinsbraten and some cold ham remained rather dry and tasteless, but the Speck turned out extremely fat and, thanks to being sparse, very welcome. The best ingredients, however, were the dry salty meat (possibly, a Surfleisch) and a weird custom creation, resembling Speck filled with a bread/ham mix and heavily spiced with garlic.

Needless to say, by the time I reached the leftmost side of the dish, my mood had improved a lot, and I was thinking of Emberger’s Brettljause as being quite creative, authentic and different, rather than boring or even disgusting. If you get hungry while walking from Krems to Dürnstein, you can do much worse than to try it.