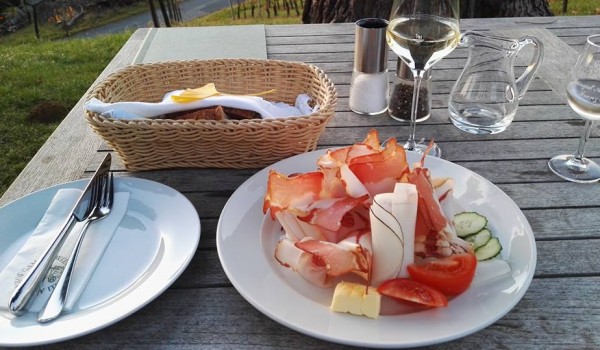 If yesterday a “Turopolie” appeared like an illness to me, a “Manturo” really sounds like a name of some leftist South-American president. Actually, as the menu helpfully explains, a Manturo pig is nothing but a mix of a Mangaliza (of Burgenland/Hungarian origins) with a Turopolje pig of Croatia. Considering that both breeds are quite rate, I felt like a criminal ordering this dish. Well, no, not at all actually.

With the dish described as “best of” in the menu, I expected some Speck, salami and maybe a Verhackertes. It turned out, however, that the best part of Manturo is the Schinkenspeck, the rest being assumingly easily ignorable. Honestly, it was a bit like buying a “Best of” CD of a favorite artist and realizing later that it contained only one song, the one considered his best. It’s logical, of course, but somehow disappointing nevertheless.

Manturo did not disappoint me however. It possesses (or, let’s put it bluntly, possessed) a seriously good piece of ham/bacon, about 25% meat compared to 75% fat, but it was the fat that made the dish special: slightly salty and virtually melting in the mouth. For some reason, it came with quite a lot of giant radish, as well as a few tomato and cucumber slices, but at the end, all of them were superfluous; the pork standing out perfectly by itself.

Brolli’s dish is not strictly speaking a Brettljause (they do have a Brettljause on the menu, though), but it’s worth trying if money is not an issue. At 16 Euro it’s highly overpriced, no matter how rare the pig was. On the other hand, Brolli owns one of the most pleasant gardens of the South Styrian Weinstrasse, and the waitress was very nice to point out that I was cycling in a totally wrong direction after finishing all my wine and Schnapps. Saving me an hour of pointless cycling in the dark is certainly worth an extra point.