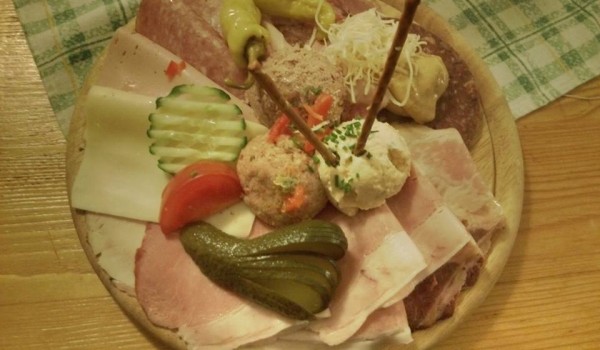 The cellars of the Lower Austria’s region of Mostviertel have obtained quite a lot of bad publicity recently, thanks to a certain Mr. Fritzl. I wonder if that has affected the Mostviertel’s villages of Eichberg and Ahrenberg, because they sport entire streets of cellars. These seem to be wine cellars from the outside, but who knows what secrets they are hiding.

Well, the secret of Denk’s cellar, apart from a great Chardonnay, is a surprisingly good Brettljause. Denk’s approach is truly to provide “a bit of everything,” in both “a bit” and “everything” senses. Most of the sausages are represented by one or two slices only, but there are so many of them (seven at least), that the result is a very filling dish. Besides the sausages, there is cheese (mentioned here for the sake of completeness only, not because of its taste) and three spreads. The white creamy one was a great replacement for the standard Liptauer, having a much finer taste. The Verhackertes was pleasantly spiced with paprika, and the liver spread, blessingly, did not taste of liver. It did have a very strange taste, though, oddly reminding me of something they use to freshen the air in public toilets, but it was completely edible.

Out of the meats, the blood sausage and the pork jelly turned out to be very satisfactory (with sufficient mustard and horseradish anyway), the Schweinsbraten much fresher than usual, having a light gray color and a solid texture, and the Speck – if that was Speck, which I am still not quite sure about – pretty sensational. It was quite fat, very salty but not as dry as one expects.

Solettis aside, all the ingredients must have come from the local farmers, as the last page of the menu proudly pointed out. This is a Brettljause that is great in terms of both quality and variety, and I can easily imagine eating it a few more times before getting bored. And when I am bored, there are at least 30 other cellars to choose from.