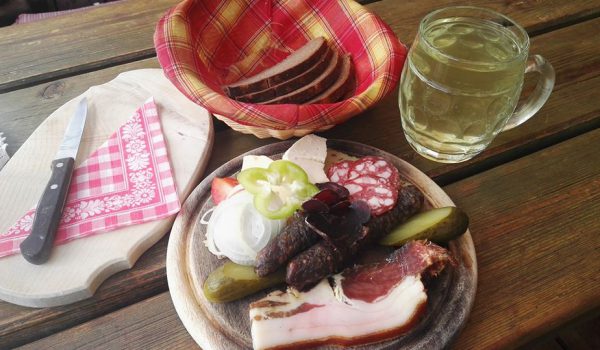 Those who visit this site and read my reviews regularly (which is, like, nobody) know that I always start eating a Brettljause by getting rid of the ingredients I like the least. In the same spirit, let’s pull out the stuff I disliked about Streitnighof first. Plain and simple, it smells of shit. Not that this is particularly surprising, as this Buschenschank is a part of a farm, and the cow barns are just twenty meters away. The problem is, I was sitting right in front of the door leading inside the house, where, undoubtedly, toilets were located, and it was very hard to convince my mind that the cows were to blame. On the other hand, the smell seemed to become stronger each time I brought the mug of Most to my mouth… Oh well, let’s stop the speculations.

It’s a good Brettljause. It’s probably the most authentic one I’ve had this year. Even the fork wasn’t provided, which always adds a whole point to authenticity (and shakes that old childhood axiom that eating with a knife is a deadly sin). Content- and taste-wise, it lies in between the Marenden of South Tyrol and the rich, tasty offerings of Styria – the fact that can be explained by looking at a map and discovering that Bad Kleinkirchheim is almost halfway between South Tyrol and Styria.

The super-fat Speck and one-and-a-half Hauswürstel did dominate the Brettl, but both were very tasty, though a bit of a challenge to my old teeth. The home-made salami, while not up to Italian standards was of better-than-average quality, and the strange thin dark slices of meat were quite interesting, even though I still don’t quite comprehend what they were (the Bresaola was definitely their inspiration). Plenty of butter was a welcome sight, as were (at least initially) the two types of cheese: a white one, with an unexpected lack of any taste and a slightly rubbery yellow one, with some added spices that made it taste like a shower gel.

The Verhackertes, while quite pleasant, unfortunately could not match the strong taste of Styrian, and even a few Lower Austrian, equivalents. Finally, the liver spread, hidden beneath the other meats and therefore discovered far too late, tasted very strongly of liver and, as a result, was almost fully fed to the owner’s cat, who had some serious problems with one of his eyes. Fortunately, the other seven or eight cats living in the farm did not show up, or my Brettljause experience would have been a very short one indeed.

I guess I could have enjoyed Streitnighof more had there been more visitors, as sitting alone (not counting the cat) was a slightly uncomfortable experience. On the other hand, I  should not have expected anything different at 4 p.m. on a Friday after the main holiday season. As a quiet and authentic, albeit a bit remote Brettljause location, Streitnighof can only be recommended.