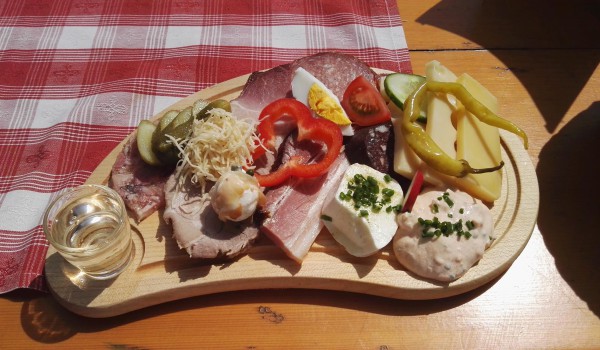 To keep the long story long, it took me more than three years to get hold of this Brettljause. Back in 2013, I read about Almheuriger Moas in a short article in a magazine distributed free of charge in trams and trains. In that article, some artist described the Brettljause of Moas as the best in the world. Needless to say, for me that meant only one thing: go there, despite the fact that I had already been to Lunz am See a couple of times already and found it rather boring.

It also turned out boring in 2014 and 2015. In 2014, I found the Heuriger and thought it was closed due to bad weather. In 2015, I went straight to it, and found it closed because it was only open one weekend per month, and I had of course chosen a wrong one. This year, however, I was careful to check the opening hours, and had a successful mission, which proved that a) Lunz am See continued to be boring and b) artists were not to be trusted. They obviously don’t go out enough.

Almheuriger Moas is nice as a rather remote and thus quiet location; it is a real farm, where one can spend holidays, if one is not disturbed by the smell of cow dung. Unfortunately, despite being located on a hill, it does not boast any exceptional panorama; in particular, the Lunzer lake is hidden from the view by another hill and some woods. The menu is disappointingly short, and the only type of Most available is tangy and therefore best consumed mixed with mineral water. The Brettljause, though thickly cut and sufficiently varied, looked better than it tasted, although I admit that it did suffer from staying on my table under direct hot sun.

This time, the single most unpleasant ingredient was not the Blutwurst, but the pork jelly, which was so tender it dissolved in the mouth. I have nothing against dissolving jelly, but when the pork dissolves too, it is a bit suspicious. The Speck, Geselchtes and Schweinsbraten were OK (the Schweinsbraten especially), but slightly lacking in flavor, and thus benefitting from some salt. The two slices of some unidentified Wiener-type sausage were so bland, however, that not even salt could save them. Surprisingly, the Jause was quite cheese-rich: apart from two types of standard cheeses (one of them slightly tasty, the other typically Lower Austrian), there was some sheep cheese and even a ball of Mozzarella. The final ingredient, the Liptauer spread, was unusually enjoyable, if a bit watery – possibly because of being exposed to the sun.

The complimentary Schnapps concluded the dish on a positive note, but to tell the truth, although I did not feel especially full, it would not have crossed my mind to order another Most or anything else to eat. Almheuriger Moas is a nice place, but not more than that. And now I can merrily live without Lunz am See for a few years.