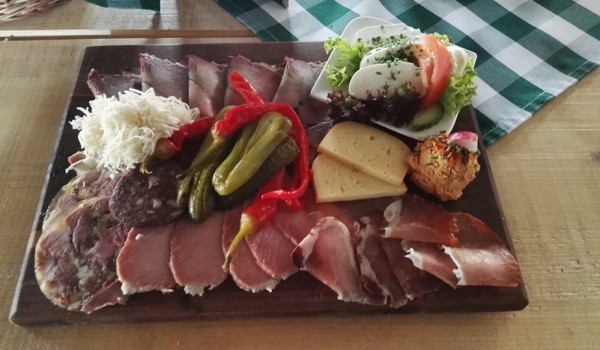 I did it. It took me a few years, but now I can proudly say that I have visited each and every crème de la crème Mostbaron Heuriger at least once. Reikersdorfer’s Presshausheuriger has long remained my last unvisited Heuriger because of its hard-to-reach location. There is no bus stopping nearby and actually no bus at all on weekends. Amstetten, the closest city, is at least 10 kilometers away on a straight line, which can easily translate into 15 on the curvy roads across the fields. Even from Ulmerfeld, the closest railway station according to Google Maps, one needs almost 2.5 hours to reach it. It’s also located on a hill (which Google Maps do not show), making the walk quite strenuous.

It was well worth the effort, though. After a long winter spent drinking overpriced wine in touristic city cellars and chewing Italian antipasti in dark bars pretending it was a Brettljause, it was quite a relief to be faced with a huge plate filled with differently processed bits of a pig, whose name the owners could easily share with me, had I the courage to inquire. It was also quite nice, for a change, to be handed a bill that made me wonder how the owners could make their ends meet at the end of a month, rather than thinking about how I am going to do the same.

Bad things first, because I really want this review to sound positive. Where is the bloody salt?!?! I don’t mind putting some salt on the sheep cheese, because it really has no taste of its own, or even on the Schweinsbraten because they are usually better when salty, but why should I have to salt the Geselchtes, Kümmelbraten and even Speck? Second point: the Liptauer. It’s a classic Heuriger spread, I know, but let’s leave it to the tourist taverns in Vienna and its surroundings. Climbing a hill in the Mostviertel to see that boring pinkish paste is totally unnecessary.

The lack of salt aside, this Baronjause was great, every ingredient creating an impression of having being locally produced. While not being a big fan of Blunzen and jelly, I have to admit that there is quite a difference between industrial and homemade stuff. The Schweinsbraten did taste fresh, even though they came in two varieties, one of a significantly lighter color than the other. The top marks go, however, to the splendidly garlicky garlic spread and the Kümmelbraten, which looked as good as they tasted (one cannot really see the lack of salt… but let’s close that chapter). Even the cheese (the proper, not the sheep one) had a rather strong and pleasant flavor, which is a rarity for the Lower Austria.

To be fair, there are a couple of other Mostbarons that would beat Reikersdorfer’s on the quality of their Jause. However, there are quite a few dishes on this Heuriger’s menu (such as the Presshausjause featuring cold spare ribs) that look interesting enough to warrant a repeat visit; after all, my experience shows that the most expensive Baronjause served at Mostbarons is not always the best choice. The Most is great and cheap, however, and having a location with a view is certainly Reikersdorfer’s strong selling point.