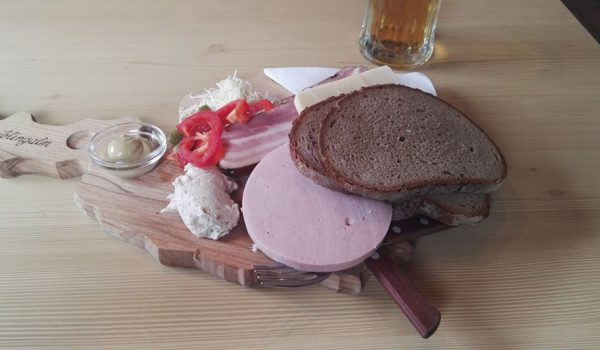 I am quite sure I’ve been to Kaiblingalmhütte before – in that short and strange period of my life back in 2010 when I started to order Brettljausen everywhere I went but did not write about them. Why otherwise was I so certain to see a huge thick slice of supermarket’s Extrawurst on my Brettl? It quite shocked me last time, looking somehow very out-of-place in what I have always considered the top Brettljause region of Austria.

Well, for some reason I’ve made the mistake of visiting Kaiblingalmhütte again. (To write about it and warn the others, I’m trying to tell myself, but it’s a weak excuse.) However, if last time I was sitting outside and enjoying a nice view of the surrounding Schladminger Tauern, today I had to hide from the cold and the wind inside, the only other visitors being a large group of local workers, probably taking a break from preparing the slopes for the next skiing season.

As the memories came back, I realized that the Brettljause did not change at all. Apart from the Extrawurst, the Map-of-Austria-shaped board contained an equally thick slice of a Wiener sausage, a thick slice of boring cheese, two long and thick slices of Speck and some very cold and very white Schmalz. Actually, all the ingredients were very cold, as if coming from a wrongly calibrated fridge.

The Schmalz was the one ingredient that benefited from being slightly frozen. It was somehow much easier and more pleasant to eat in this form, and went well with the unexpectedly fresh bread. In fact, if Kaiblingalmhütte served me only the Schmalz, the bread and the good strong Styrian horseradish, I would have left feeling very happy.

Instead, I left feeling very heavy. I finished the dish only for the sake of proving that it could be done, but already after a third of it any interest in eating was lost. All the ingredients were super-industrial, and although none of them were especially bad, the whole experience was totally boring.

If you like your Brettljause’s ingredients thickly cut but do not care what they are, Kaiblingalmhütte may just be the place for you (especially if you are very hungry). On the other hand, passing by a supermarket on your way to a mountain and picking up exactly the same stuff is a viable and cost-effective alternative.