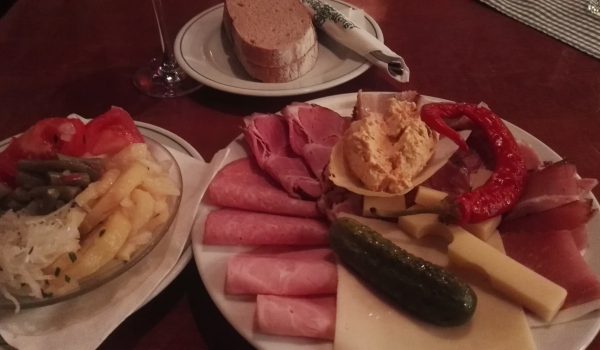 For years, I have been passing by Bach-Hengl not daring to go inside. On the one hand, it had no menu hanging by the entrance, and until recently their website featured no list of dishes (even now, the site looks unprofessional, to say the least). More importantly, thanks to its location in the very center of Grinzing, this Heuriger looked as tourist-oriented as a Heuriger could possibly be, including badly photoshopped pictures of world leaders on the walls and “amusing” slogans like “Grinzing will save the world.”

True to my expectations, the tourists did not take long to arrive, despite the relatively early hour. While I was enjoying my wine and Jause, a stream of Japanese started pouring through the entrance, past the buffet and into the room at the back. Believe me or not, the procession lasted for many minutes, reminding me of the poor children sent for scientific experiments in Monty Python’s The Meaning of Life. The last tourist was followed by an accordion player, of course, and a waiter holding laminated sheets of paper with the available dishes’ pictures on them.

Bach-Hengl’s Brettljause is appropriately called “Kalte Platte,” since all the ingredients arrived on a plate rather than a wooden board. Honestly, it did not look beautiful, but once I started eating I was positively surprised. First, the variety was impressive: I counted seven types of sausage in addition to cheese and Liptauer. Second, the sausages actually tasted non-industrial. The Geselchtes and the Schweinsbraten especially were as tasty as those one can find in the top Mostheurigers of Mostviertel, and that means something.

I do not really see myself visiting Bach-Hengl anytime soon (unless all the better places around are closed, and I am thirsty, and I can sit in the garden, and the garden is empty, and, and, and). However, if you are a tourist and you are feeling clueless why your travel bus brought you to such a strange dark place, ignore the laminated menu with the pictures and try to say “Grosse Kalte Platte” the best you can. You will not regret it. And do not forget to drink a lot; being pissed makes the accordion player almost bearable.