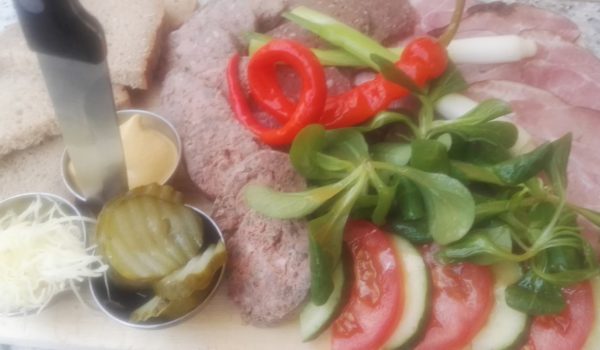 As you may know, I have reviewed Josef’s twice already: for his Spain– and Italy-inspired Jausen. Now the time has come for the third and the final one: the Austrian Hütten Brettl.

There is actually a very good reason why I have left this particular type until the end: the dish’s description in the menu. It simply says “Hüttenspeck, Blutwurst, Leberwurst.” Although I have nothing against the Hüttenspeck – as long as it remains Speck – the regular followers of this site (if I had any) would know that liver and black pudding are two things that I can stand only barely and only accompanied by a large amount of alcohol. What gave me some strength, however, was an article I read somewhere saying that the “Leberwurst” actually does not have to contain any liver, similarly to the “Leberkäse,” which contains neither liver nor cheese. So, for good or for bad, I did take the risk.

Alas, the Leberwurst had quite a lot of liver in it. Fortunately, it had enough spices added to make it taste not so much of liver as of some fruits. I hardly believe I am writing this, but it was not so bad. Neither was the Blutwurst – like in the case of Leberwurst, I could easily believe that it came straight from the farms of Lower Austria (as the menu says) and not from a supermarket down the road. As for the Hüttenspeck, it turned out to be (I suppose due to some logistical problem) not a Speck at all but a plain old Geselchtes. A plain old but good Geselchtes.

All of the above may sound like a disaster, but it wasn’t. I probably have a slight bias towards Josef’s Genießerei (I do like when people recognize me and bring me beer without having to order it), but the Brettl was prepared with quite a lot of attention and nicely presented, and was absolutely edible. It was just not as good as the Italian and Spanish versions.