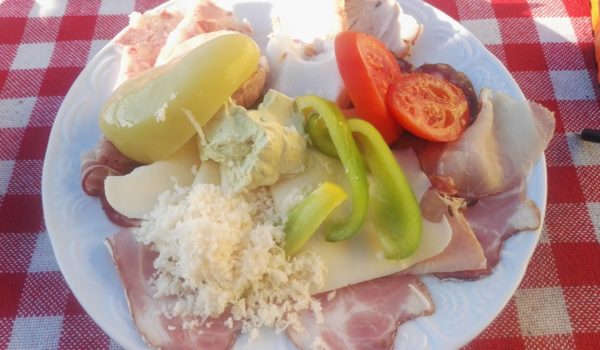 Something is changing on the South Styrian Wine Street (Südsteirische Weinstrasse). Exactly three years ago I was riding up and down the hills on my hotel-rented e-bike, overwhelmed with the opportunities of getting full on Brettljausen and pissed on wine. This year, the hotel had stopped the bike-renting, and I am on the foot desperately looking for open wineries. And the weather is exactly the same – sunny and warm – as three years ago.

Prettner was the first open restaurant I found after a three-hour hike, but it as well worth the effort – sitting on the sunny terrace looking at Slovenian vineyards was much more than one could wish for on the 10th of November. The winery has two Brettljausen: the more expensive “Hausplatte,” to share and charged by person, and the cheaper “Prettnerjause,” which the waitress decided I wanted when I asked for a Brettljause. Unlike the Hausplatte, which is served on a nice wooden board, my Jause arrived on a normal plate, but its plain look did not damage its superior taste qualities.

To start with, I even found the pork jelly and the liver spread enjoyable, even though normally I try to get rid of these ingredients as soon as possible. Two types of Speck were present, as well as Geselchtes, salami and Schweinsbraten – all thinly-cut and featured as three or four slices each, but strangely filling. The pumpkin spread, as expected in Styria, replaced the standard Liptauer, and was at the end a much better option. The highlight was, however, the very white Schmalz, lightly salted and very very fat.

Considering  how difficult it was to find a Brettljause today, Weinhof Prettner, with its excellent wines and perfect Styrian “beetle” beans with pumpkin oil, was a great success. However, its Brettljause would have been a success under less extreme conditions, too.