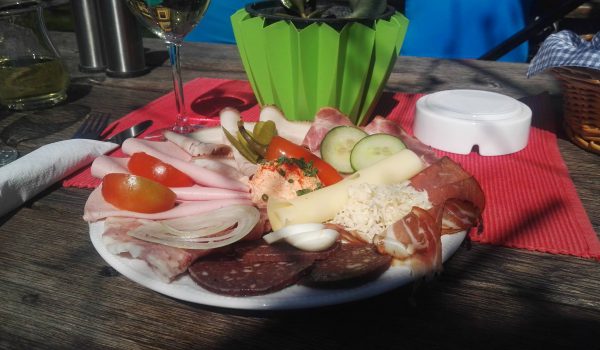 Although casual visitors to this site may think of myself as a Jause-consuming machine jumping brainlessly on everything looking like cold cuts, in fact I follow a set of rather strict rules (self-defined and therefore occasionally subject to elastic personal interpretation). Aside from the obvious ones, like “Do not review the same dish in the same restaurant twice,” “Ignore cheese plates,” and “Rate only à la carte Brettljausen,” there is a more obscure one, which says, “At the first visit to a restaurant, do not order a Brettljause that most people will not.”

What this means in practice is that if I go to an unfamiliar Heuriger and while studying the menu find the dishes called “Brettljause,” “Bauernjause” and “Gitti’s finest pork bits” (not that I’ve ever seen such a name, unfortunately), I’ll go for the first or the second. If they are any good, I will eventually return for the third choice, but I always make sure I start by “going with the flow” and avoid experimentation, because that’s what most people do.

The sad truth is, occasionally following this rule means that I make a wrong choice fully consciously. Stockingerhof was the case in point. An entire section in its menu was dedicated to the home-made smoked meats like Speck and Lardo and included a mixed plate of these specialties. Yet, the law-abiding person that I am (notwithstanding the fact that I was the idiot behind that particular law in the first place), I went for the bog-standard Wachauerjause instead, which absolutely anyone capable or reading the first line of the menu would have ordered. For the simple reason that it was the first dish in the menu.

It was not all doom and gloom, of course.  In fact, it was a fairly competent Brettljause, with the tasty Speck in particular giving a flavor of what the experience could have been had I been slightly more flexible. With the black pudding finished first with the help of the rather weak horseradish and onions, the remaining ingredients (pork jelly, Schweinsbraten, Geselchtes, Liptauer, Extrawurst and some cheese) were totally edible but unexciting. Without speculating about their possible supermarket origins, I must admit I quite enjoyed this Brettljause at the end of the day, which may have had something to do with the Stockingerhof’s generally relaxed and not-too-touristic atmosphere. In the case of a restaurant so close to the tourist magnet of Dürnstein, that meant that there were a few Austrians around.

I suppose you are going to hear from me about Stockingerhof again one day. If you happen to be there before me, however, you know now what to order.